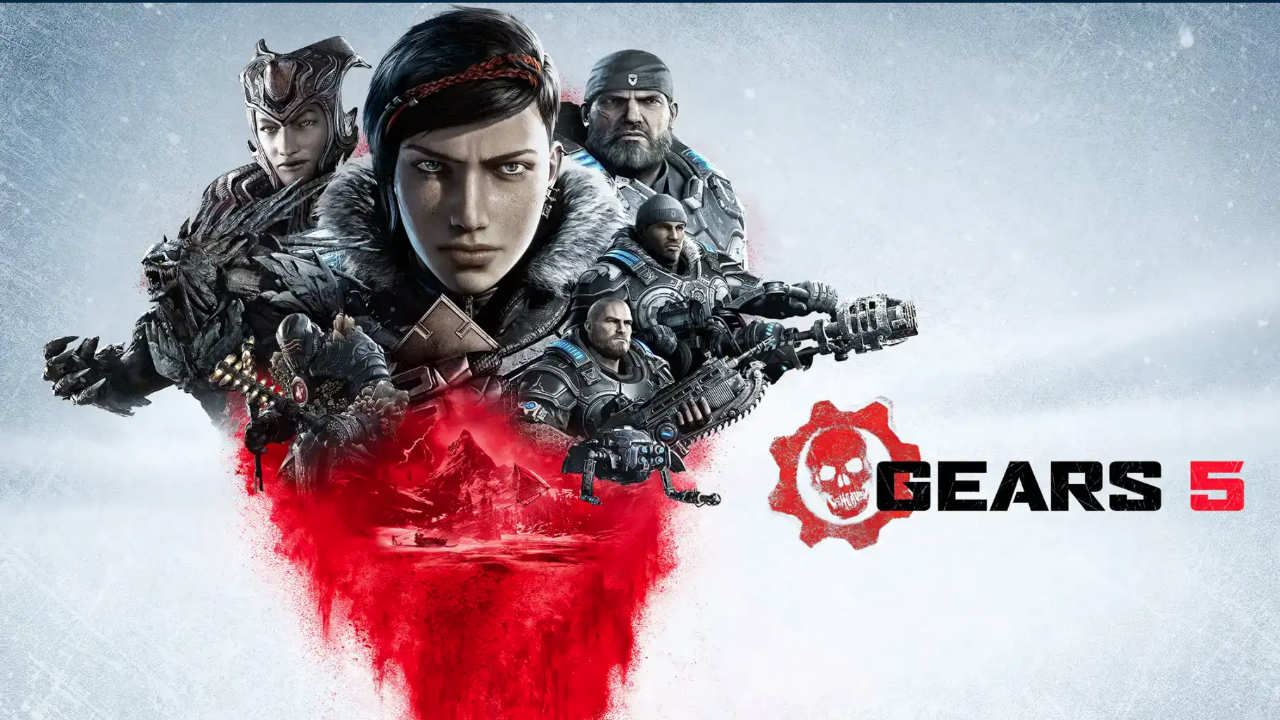 Gears 5 Review: The Xbox exclusive we’ve been waiting for

Gears 5 is available for Xbox One and PC. The game is developed by The Coalition.

Gears and Halo have been two franchises that have been the reason to own an Xbox. Halo was the franchise that made playing FPS games on a console feasible and fun. The Gears franchise defined cover-based shooters and to this day is used to showcase the power of the Unreal Engine. Microsoft may have had a thin portfolio of exclusives this generation and while some have been lacklustre experiences, others have become the reason to own the Microsoft console. Gears 5 is one of those games. It brings with it stunning visuals, tried and tested gameplay with the right twists and a story that caters to Gears fans. The game isn't perfect, but one worthy of your collection.

The story is a continuation of where Gears 4 left off and if you are new to the franchise then worry not. In the ‘extras’ menu, there is a recap of the entire franchise and a separate one for the events of Gears 4. It should be enough to get you up to speed with what you need to know about the COGs war against the Locust. At the beginning of the game, for the first couple of chapters, you don the role of JD Fenix, the protagonist from Gears 4 but the focus quickly shifts to Kait and you start to play the game from her perspective. In Gears 4 we realised that Kait has a mysterious connection to the Locust and that theory is further explored in this game. Without giving too much away, you embark on a mission to discover the origins of the Locust, encounter some interesting plot twists about where they came from and finally come face to face with the main antagonist. The game tries to make this final encounter as emotional as possible. Emotional encounters haven't been the franchises strong suit. The overall story plays out like a B action movie with silly jokes that won't make you laugh and forgettable supporting characters. There is a new character by the name of Fahz and initially, he is disliked by our band of JD Fenix, Kait and Del. All of a sudden, two thirds into the game, Fahz becomes a part of the band and all the conflict is forgotten. Fahz and Del are the comic relief in the game and do a decent job of getting a chuckle or two out of you.

Overall, the story is for the fans who know the lore well. For the rest of you, it is an initiative to go back and play the other games if the recap isn't enough and if you want to experience this sci-fi fantasy story of man vs beast.

Like we said before, the Gears franchise pioneered the cover-based shooting genre and we have seen a number of franchises mimic this concept. For the most part, Gears 5 stays true to its origins with some much-needed twists that work in its favour. It is still a cover-based shooter, but the environments are larger making it easier for enemies to flank you from different sides. This encourages you to move from cover to cover and deploy some of the new tactics. The biggest new tactic is Jack - your robot companion who up till now was a glorified door opener and USB drive to transmit data you found. In Gears 5, Jack has a bunch of new abilities. Pressing the ‘Y’ button on the controller and Jack can make you and your teammates invisible for a short time, deploy a protective shield in front of you and even grant you invulnerability for a few seconds. Pressing the left trigger along with the ‘Y’ button, you have access to a different set of abilities for jack. This includes the ability to hijack a corrupt droid, launch mines that can shock the enemies, so on and so forth. There are some RPG elements thrown into the mix and if you are worried that the RPG elements will complicate things, worry not. They are nothing more than a simple skill tree that affects only Jacks abilities. You can upgrade his skills that you control along with things like his stealth ability, the ability to take one multiple foe with electric shocks, so on and so forth. Think of Jack as Atreus from God of War. You don't need to babysit him, use his abilities only when you like and there are times when he fights on his own. There are some special upgrades for Jack scattered throughout the world and this is where the biggest change to a Gears games come in - the world. 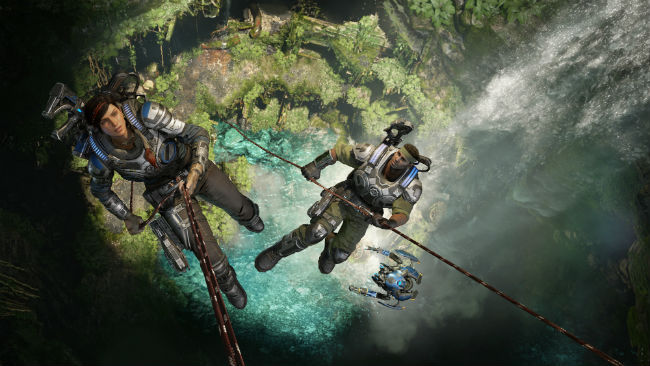 Think of the world in Gears 5 as the maps in Metro Exodus - open landscapes with multiple side quests and places to discover. But once you leave the map and progress to the next area, there is no coming back. So you may want to finish exploring before moving on. To navigate these large environments you have the Skiff. The Skiff is a sort of ski-boat hybrid that lets your companions ride with you and it also has storage for some guns you find around the map. The open map has areas that you can discover by simply passing them and one of your companions will automatically highlight that it is a possible place of interest. These small areas on the map are littered with Locust that are hanging around and once you clear them you are treated to an upgrade for Jack or a cool new weapon. It is these areas that are a treat to explore and give the game the much-needed upgrade from being a traditional corridor shooter.

Speaking of guns, it is a mix of old and new. My favourite being the Lancer that now houses a grenade launcher rather than the chainsaw. The gun can give you a tactical advantage as you can weaken enemies from afar before emptying clip after clip to take them down. 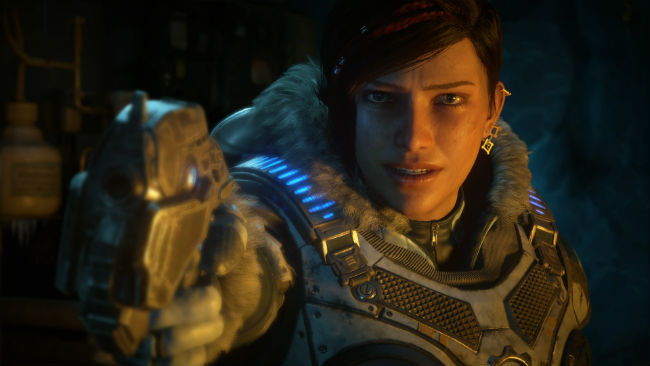 All of the above, mixed with some cinematic high octave moments make Gears 5 a lot of fun. The campaign can be beaten in a weekend (around 15 hours) including some time spent exploring but there is a reason to come back for more as the game supports three-player co-op for the story. Two control the human characters and one controls Jack with his newfound abilities. It is a nice mix to the multiplayer aspect of the game.

Speaking of multiplayer, this is where the game has a lot of potential to shine. Since we played a review copy of the game, we didn't find too many players online. However, the diversity in modes is what will keep you coming back for more. The multiplayer (apart from co-op) is broken up into Versus, Escape and Hoard. In Versus, you can have a quick game, a ranked match or be a part of a custom game. 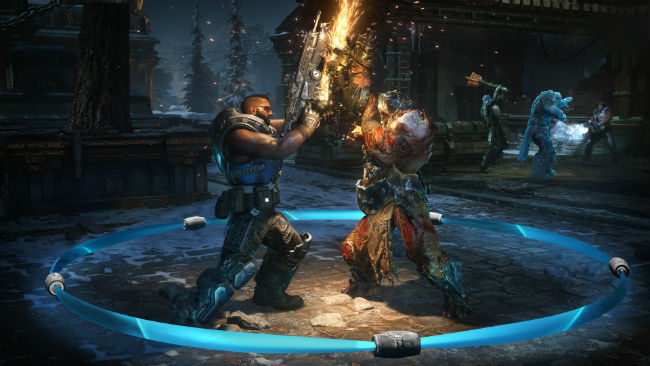 Escape, which is a new mode in the game has you and your friends escaping from the clutches of the Locust. Not only that, once you begin your escape you will have to be quick on your feet as there is a poisonous gas behind you. The beauty of this mode is that there is a map builder and once you have successfully completed your created map yourself, you can upload it for the world to give it a go. It is nice that you have to first finish the map yourself ensuring only the maps that can be beaten are uploaded and the server won't be full of unbeatable maps.

Last but not least, we have good old Horde Mode. this is the classic Horde mode, more in line with what we saw in Gears 4 with you having a fabricator at your disposal to construct turrets, get new guns and more during the course of 50 waves.

Overall, the gameplay is fresh enough with the right changes to appeal to fans of the franchise and fun enough to cater to newcomers. The gameplay in Gears 5 is its strongest suit. 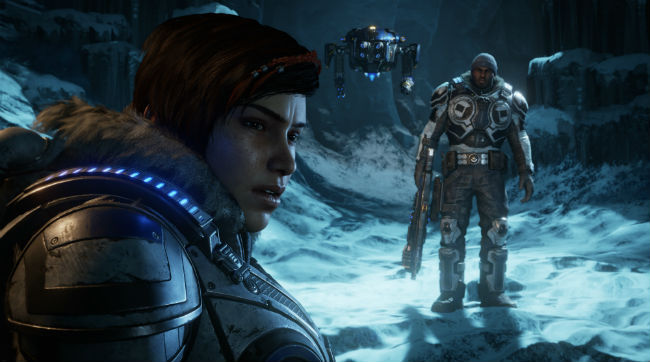 Moving over to graphics, this will be a treat for those running the game on an Xbox One X. The game claims 4K HDR at 60fps on TVs and monitors that support it. Sadly, we played the game on a 1080p TV.  On the 1080p screen, the game held 60fps for the most part. It was towards the end of the game where there is nonstop crazy action, we did notice some framerate drops. Moving over to the visuals, the game looks stunning with diverse environments. There are 2 open maps to explore, one filled with snow, and the other red sand. In the midsts of all this you do have some sequences set in a small village, industrial town and an abandoned research centre. Each environment brings with it a signature pallet that makes the game look quite diverse. 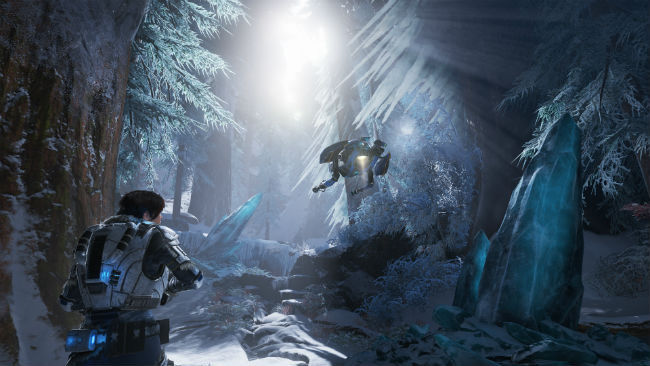 The character models also don't look as stiff as they usually do. Moving in and out of cover feeling smooth, destructible elements in the environment crumble with realistic physics and the Skiff making you feel like there is actual wind propelling the craft. Even closeups of the characters during cutscenes look detailed, rich and have good lip sync.

To truly realize how far the game has come visually, you have to go back and play the first game on the 360 (or Xbox One through backwards compatibility). Its is an evolution in visuals. Even if you play Gears 4 and then 5 you will see improvement in polish in the overall game. If you have a 4K TV and an Xbox One X, you will have a great visual experience with this game.

This is where it feels like the game is at par with Gears 4 and that isn't a bad thing at all. From the gunshots of the Lancer, Sniper rifle, the grunt of the chainsaw and even the sound of you snapping behind cover, it is all rich, immersing you in the game. The game supports Dolby Atmos and if you have a nice pair of headphones with the Dolby Atmos app enabled on the Xbox One X, you can make out the height channels kick in when enemies are flanking you from different sides. It is all very immersive. The only downside is a little cheeky voice acting but considering the grand scheme of things, this is but nitpicking on my part. 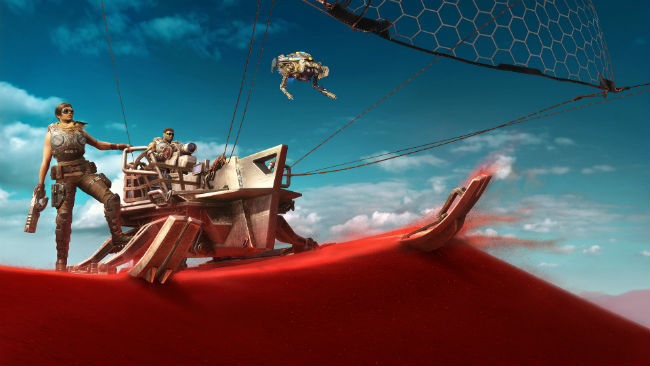 Gears 5 is a fantastic game with stunning visuals, improvements to gameplay, a story that fans will appreciate and multiplayer that will ensure you come back for more. The only qualm I have and this is noticeable when you play Gears 4 and 5 in succession, is that the gun loading mini-game seems slower in Gears 5. This isn't a big deal, just something I noticed. If you are an Xbox One gamer, this is definitely worth adding to your collection. The cherry on the cake is that if you are a Game Pass or Game Pass Ultimate subscriber, you get the game on launch day as a part of your subscription. A must-have for those that enjoy third-person action-adventure games.

We played a review copy of Gears 5 on the Xbox One X.