While it's true that the #PCMasterRace needs nothing more than a gaming keyboard and mouse, it doesn't hurt to actually consider getting yourself a controller. For one thing, there are games out there *cough*Dark Souls*cough* that are designed to be played using a controller. Using a keyboard and mouse with such games simply hampers your overall experience. With the large majority of AAA developers introducing crossplay between consoles and PCs, many games come with a robust gamepad control scheme which is the ready to go the moment you plug a controller in. Of course, there's also the advantage of being able to leave the confines of your chair and sit comfortable on the couch for your gaming sessions. We've got a wide selection of controllers for you, with options for regular gaming, to specialised controllers for your flight sim fantasies. Although the prices of the products mentioned in the list given below have been updated as of 7th May 2021, the list itself may have changed since it was last published due to the launch of new products in the market since then. 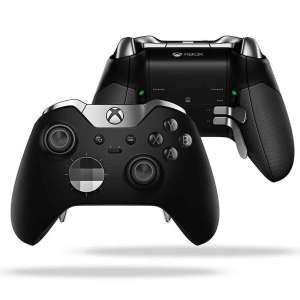 The XBox Elite Wireless controller is one of the most comfortable controllers on the market as of now owing to its rubberised grips, a 'cool-to-the-touch' finish and stainless steel swappable components.The controller is also available in white to match the Xbox One X special edition white variant. There are a slew of paddles available on the backside of the controller that can be assigned to the functions of any face button and reinforced hair triggers which can be customised to different sensitivity levels.

Tailored specifically to be a budgetary purchase, the Logitech F310 wired controller features two analogue mini-sticks, two buttton/trigger combos, four programmable action buttons, a D-pad and the usual 'back', 'start', and 'mode' buttons. On the underside of the controller, there lies a toggle that allows users to switch between XInput and DirectInput. Titles play relatively well with this controller since the tactile feedback is good, the sticks move about freely with the right amount of resistance and the dual triggers are quite responsive. If you're scouring the market for a cheap, effective controller, look no further.

If you're looking for a controller for your PC or the PS4, Astro's C40 TR may just be the perfect one for you. The controller is tailored for shooter games and for players that game for long sessions. Despite being quite exorbitantly priced, this controller gives gamers a competitive advantage, is extremely robust and ergonomic. It offers absurd levels of customisations, with features such as being able to swap the location of the analogue stickls and the D-pad. The controller is snappy and responsive and comes in both wired and wireless variants. If you do end up going for the wireless variant, rest assured, since the battery life is quite impressive.

Playable on the PS4 as well as PC (via DS4Windows), the DualShock 4 V2 controller is PlayStation's best controller yet. It fixes issues that plagued the DualShock 3, such as the weight, the analogue quality and the overall flimsy nature and also brings in new innovations such as the SHARE button. There are some more additions such as the touchpad, speaker and lightbar which are rather intriguing. The motion sensors present on this controller are highly sensitive. Overall, the controller is enjoyable to play with and is quite balanced.

The Steam Controller borrows quite heavily from the Xbox One controller in terms of design. If you're looking to buy a controller for your PC, the Steam Controller differentiates itself from the XBox One controller and the DualShock 4 by its recognisable trackpad. The controller is especially suited for strategy games and other games that heavily utilise keyboard and mouse controls. However, if you play action games that make use of face buttons, you may want to consider buying another controller since its face buttons are difficult to reach. However, the controller has great haptic feedback, features an ergonomic design and is highly customisable.

The Hori Real Arcade Pro. V Kai (for XBox One/360 and PC) and Real Arcade Pro. 4 Kai (for PS4/PS3 and PC) are mid-range fightsticks specifically designed for the fighting genre in video games. The fightstick is build on a solid base and features high-quality price, all at an affordable price point. Even though it is largely made out of plastic, the stick feels and plays quite premium. The stick and buttons are extremely responsive and are cheaper alternatives to the Mad Catz TE line high-end fightsticks. So, if you want to save some dough and still get a great fightstick, these should be your pick.

Carefully curated for retro lovers, the 8bitdo SN30 Pro controller borrows design cues from the SNES console. This Bluetooth wireless controller is capable of connecting to your PC, Mac, Android phone, Nintendo Switch and more, and can play classic, retro games as well as modern ones. The battery life is ridiculous, with the controller allegedly lasting for over a week on a single full charge., It comes equipped with all the buttons, sticks and bumpers that are present on modern controllers, even though it is packaged in a retro build. It is a super portable controller which is perfect for gamers who appreciate retro nostalgia while also wanting comtemporary functionality.

When it comes to high-end flightsticks, the search comes to a halt at the Thrustmaster Warthog HOTAS joystick and throttle. If you can deal with the expensive price tag it sports, you will be treated to a flightstick with an incredible build quality, 55 programmable buttons and switches to satisfy all your needs, a joystick, throttle and some hat switches which allow you to perform any kind of movement and more. If you are serious about flight sims, this could be the perfect setup for you. They should be ideally paired up with Thrustmaster pedals since they don't have a twist function.

The Logitech G29 Driving Force is a force feedback wheel which works with the PS4/PS3 and PC. If you own an XBox, you can check out the Logitech G920, which is compatible with the console. The G29 is ideal for racing sims and will increase your enjoyment of games in this genre. It looks and feels like a real steering wheel and the leather-topped wheel feels much more premium than competitors that use rubber as standard. There are plenty of PS4-specific controls, which make them a delight to use for PS users.

If you're seriously into racing simulators and want to add another dimension to your experience, you should consider getting the OpenWheeler GEN2 Racing Wheel Stand Cockpit, which is basically a racing sim chair that must be paired with a racing wheel such as the aforementioned Logitech G29. It is equipped with a racer car seat that looks and feel 'real', comfortable seat cushions, a sturdy wheel stand, shifter mounts and pedal mounts. It is also relatively resonably priced and is extremely stable while racing.