Jabra Freeway - On the freeway of excellence Review 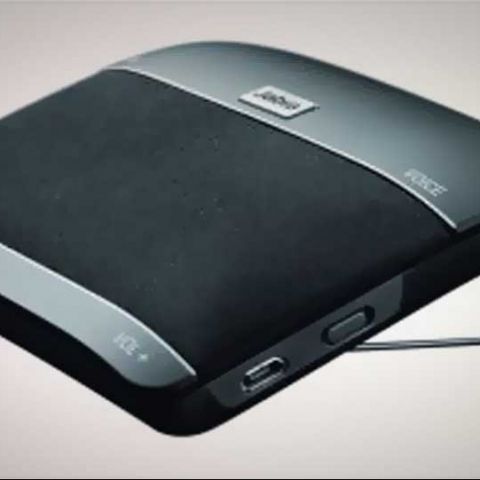 The Jabra Freeway is an in-car Bluetooth speakerphone, a role that it performs very well. Speaker quality is top class for voice, as well as for music. The ability to pair with a couple of devices simultaneously is another plus. The ability to accept or reject calls via voice makes it a true handsfree device especially for those whoï¿½s better part of the day is spent behind the wheel. The price tag is a little steep, at Rs . 7,499, but there are hardly any products in this category giving the Jabra Freeway exclusivity. Buy it if you need a good performing handsfree speaker unit with a robust battery.

BUY Jabra Freeway - On the freeway of excellence

Jabra Freeway - On the freeway of excellence detailed review

These days, hours of traffic snarls make using of cellphones behind the wheel mandatory, even if it’s frowned upon by the legal system in our country. Cradling a phone between your neck and shoulder isn’t the most comfortable experience, and neither is it very safe. Bluetooth devices are the way out, and are designed with such usage scenarios in mind. The Jabra Freeway, goes a step further, by allowing true handsfree – you needn’t press a key even to accept an incoming call! Additionally, instead of sitting on your ear, it has a speaker, which can be mounted 2-3 feet away from you without any loss in signal quality or clarity. It’s a pity there are very few of these devices around, which is why when we got a chance to test the Jabra Freeway, given our frustration with juggling calls on busy Delhi roads, we jumped at the opportunity.

The Jabra Freeway offers a freedom from the de facto Bluetooth headsets that plug into your ear. It doesn’t even look like a Bluetooth unit, rather looks like a small speaker system that you can place anywhere in your car; well the closer to your ears, the better, but it’ll perform just as well from about 3 feet away. Jabra puts your life at ease with an innovative design and impressive form factor, that allows you to do more than you could with your headset. To communicate with a person while driving, you can place this device comfortably anywhere in your car.

It’s a flat device that curves towards the top. The top portion and a strip at the bottom have a matte black finish, whereas towards the center a cloth mesh smartly conceals the speakers, while protecting them from dust. The body has a total of 6 buttons. The FM radio and voice button (the latter enables voice commands) are located towards the top of the unit on either side, and above them at the center is the multi-function call button. This button accepts calls with a single tap, while a quick double tap rejects the call.

[RELATED_ARTICLE]The Jabra Freeway has a matte black finish at the upper part of the body where the Jabra moniker smartly sits along with the FM button on the left of it and Voice button on the right and right at the top on the curve there is an answer/end button. Any of the button when pressed produces a comfortable click sound, which does initiate the respective operation. Right underneath the Jabra logo, royally sits all the three speakers which are covered with a fabric cloth instead of any plastic or possibly metallic covering. Somewhere in the middle of the speaker unit is a front facing microphone, but its location isn't readily visible. Right under the set of speakers, we have three more buttons, where on the extreme left there is a volume down button and on the extreme right there is a volume up button which allows you to increase or decrease the volume of the music playing or any dialog spoken while in between of a voice call.

Moving towards the right lower edge of the device, where you could find the device on/off switch and for charging of the device there is a micro USB port is provided which is place under the power on/off button. It can be easily fitted on your cars sun shade with the help of a clip which is at the back of the device. It can also be used, placed flatly on a table, or even on your cars dashboard, but in case of the latter it may move around with excess vibrations. Since it has a loudspeaker and a good microphone, it can also be used in a room with multiple people for conference calls – a use that Jabra probably never intended, but one that it suits pretty well. Thus it can be used for conferencing between more than 3 people in one room or while on move within a car. The overall finish of the product is simply impeccable with appropriate weight, rightly place buttons which are properly placed out for comfortable operating conditions. The clicking sound could be a concern initially but with regular use it seems to fade away.

The Jabra Freeway is essentially a device meant for making phone conversations while on the move, with the ease of not using your hands.

1. Simply using your voice allows the users for making or recieving call without pressing call button on the device.
2. The built-in FM Transmitter allows the paired devices to transmit music as well as calls from your mobile phone to your cars stereo system.
3. The built-in 3 speakers with virtual surround sound provide a superb music experience with great sound quality at even higher volume levels.
4. The device smartly announces the name/number of the incoming caller
5. The voice guidance gives connection status, pairing instructions and spoken battery level.
6. Multi-use – Connects to two Bluetooth devices simultaneously.
7. A2DP streaming for music playback, podcasts and directions from GPS applications
8. Freeway promises upt o 14 hrs of talktime and up to 40 days of standby time as its battery backup

The proprietary Noise Blackout Extreme technology enables advanced background noise cancellation using DSP (digital signal processing) for clearest and loudest in-car call sound in mono ever experienced. It uses two microphones to enhance a notch for this feature and works by identifying the source of unwanted sound and filtering it out, turning a noisy car turns into a quiet office. What’s more, it has an automatic or intelligent power on and off feature that saves battery. The built-in motion sensor switches it on as and when you enter the car, one does not have to touch it to turn it on or off. If your phone(s) is paired and within range it will tell you that it is connected. And when you leave the car, it will automatically power down after 5 minutes. Shaking the Jabra Freeway a little will also turn it on if the on/off slider is in the on position.

Continue reading about Jabra Freeway's performance, our verdict and lots more, on Page 2:

Switch on the speakerphone where the lady with her lovely voice greets you with “Power On” status, followed by “Connected”, as the device connects to your phone (if previously paired). Pairing is easy, and similar to other Bluetooth devices. Jabra claims the Freeway works within a distance of 10 metres, obviously, this is with a clear line of sight, or light obstructions like your car door, or even a wooden/glass partition. You won’t get a range of 10 metres on calls with solid doors and walls between, and in any case your ears/audibility will be compromised anyway.

[RELATED_ARTICLE]The device did manage to impress us with its call audio clarity even at the occurrence of obstacles, it was quite loud and very audible. While moving in a car through the busy traffic route with your windows pulled down, we checked the audibility of the device at different volume levels. At 100% volume level of Freeway the call audible rate was proportionally over 85% but the voice was a little shrill, lowering the volume down to 80% the device did manage to produce 90% audible rate which also manage to improve the voice clarity, negating the shrilling voice. At 50% volume level the audible rate relatively reduced to 60%, which was quite audible but the voice clarity went up to 100% which made it possible for us to hear the caller with any issues even with that unavoidable traffic around. At lower volume levels the device impressively made itself useful keeping the voice within the cabin of the car and perfectly audible and not for all to listen to at traffic lights.

The audio quality offered by the 3 speakers and promising virtual surround sound is impeccable. The speakerphone with its configurations sounds really crisp and loud at 85% volume levels, the voice clarity of the device is extremely impressive in between calls. Only at 100% levels we noticed very minute but prominent jarring effect. Even while playing music through a connected device there is not much change in the audio quality but the jarring effect remains persistent at 100% sound level.

If your car does not already include built-in Bluetooth the Jabra Freeway is for you. Jabra Freeway is as easy a device to use as there could be, the speaker is loud and clear, voice commands work quite well aside from the aforementioned caveat, and you now have the ability to listen to your phone’s music on the Freeway’s speaker or your car’s stereo.

What’s more, it has an automatic or intelligent power on and off feature that saves battery. The built-in motion sensor switches it on as and when you enter the car, one does not have to touch it to turn it on or off. If your phone(s) is paired and within range, it will tell you that it is connected. And when you leave the car, it will automatically power down after 5 minutes. Shaking the Jabra Freeway a little will also turn it on if the on/off slider is in the on position.

It has 12.5 hours of talk time with receiving and making calls and playing music all over. Also, it has up to 40 days of standby time.

Jabra Freeway - On the freeway of excellence Key Specs, Price and Launch Date

Jabra Freeway - On the freeway of excellence

Jabra Freeway - On the freeway of excellence