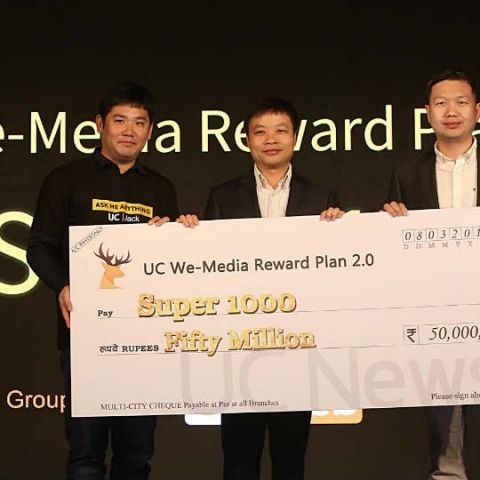 UCWeb Inc, which is part of China’s Alibaba group launched its content creation platform the We-Media Reward plan back in August 2016. Now, just after six months the company is announcing the Reward Plan 2.0. The company is investing 50 million INR initially on it’s self-creating content platform in addition to 2 Billion INR. It is promising to invest for driving content distribution in India over the next 2 years.

The company also announced a Ad revenue sharing model called “Super 1000”. Via this the company will recruit 1000 talented writers and contributors in India and Indonesia who will be able to earn at least INR 50,000 per month through the UC News platform. According to UCWeb the Program saw an increase of 200% and 350% (MoM) in its page views of English and Hindi We-Media content respectively in the past quarter.

Full the press release below

Leading the user-generated content ecosystem in India, Alibaba Group’s UCWeb Inc has announced the launch of We-Media Reward Plan 2.0, a self-creating content platform in India with an initial investment of 50 Million INR. The internet major is investing 2 Billion INR for driving content distribution in India over the next 2 years. UCWeb’s content distribution platform UC News, launched in June 2016, has registered a new milestone by becoming one of the fastest growing apps in the country with a Monthly Active Users (MAUs) of over 80 Million in India (as of February 2017).

Announcing the initiative on his visit to India, He Xiaopeng, Co-Founder UCWeb and President, Alibaba Mobile Business Group said, “Dominance of mobile and digital proliferation is leading to an increased adoption of mobile internet and is making India ‘Digitally Ready’. UCWeb is realising its vision of “Serve half the population of the planet”, and we are moving forward to the era of “GUF” (Google, UCWeband Facebook). The investment falls under Alibaba Digital Media and Entertainment Group’s targeted investment of $7.2 billion in content over the next three years.”

“Content consumption on mobile is rapidly rising while the We-Media ecosystem is still at a nascent stage. According to our data, there are at least 400,000 self-publishers in India already with a huge scope to grow the market, especially in the niche categories. UC Browser was launched with an aim to solve browsing-related problems while UC News and We-Media program aim to meet the increasing demand of varied content by users and build a well-established ecosystem. With our strengths in technology like Big Data AI and vast experience in markets like China, UCWeb will augment its focus on digital content aggregation and distribution in the world’s second largest internet market, India. We aim for UC We- Media to open a gateway to more opportunities in India’s content industry and emerge as the No. 1 content generation and service platform in 2017.” Xiaopeng added.

UCWeb is also upgrading its content and services portfolio by adding more short video-related content. Short Videos are fast becoming the most popular form of content consumed in China today and UCWeb sees huge potential for this concept here in India as well. UC News aims to provide upgraded content and services to its users and, going forward, will make significant investment in this category. According to the company’s latest Content Consumption Trends Report, video content has risen 30% in the last quarter alone. The company is in the process of setting up a separate team to handle the Short Videos section and is scouting for relevant partners to support this for UC News India.

“The latest data on UC News shows that we generated over 3,100 million page views in January, 2017 alone, which translates to 100 million page views daily. Moreover, we are experiencing a fast rise in the average time spent on UC News. As of this quarter, an average user spends over 23 minutes on UC News. Our strong user base number indicates the success of our strategy of moving ‘From Tool to Content’. We had said that content is booming and 80 Million MAUs of UC News is a clear reflection of that. Users are embracing diverse -digital content and their appetite for such content is being met by UC News”, said Kenny Ye, GM-Overseas Business, Alibaba Mobile Business Group.

We-Media Reward Plan 2.0 - A game-changer in the content ecosystem

Besides an upgrade in Ad revenue sharing model, We-Media Reward Plan 2.0 will open the door of opportunity to the most talented writers in the country. 1000 We-media writers will be recruited in India and Indonesia who will be able to earn at least INR 50,000 per month through the UC News platform. UCWeb has been setting new trends under the UC We-Media program where people get an opportunity to create, to write, share thoughts and engage with their followers on UC News. The Program saw an increase of 200% and 350% (MoM) in its page views of English and Hindi We-Media content respectively in the past quarter.

UC News is a big-data powered content distributor, serving as a one-stop source of trending and curated news content covering all popular categories that Indian users can consume on the go, with featured channels including news, cricket, technology, entertainment, movies, lifestyle, health, humor, etc. UCWeb’s strength in technology is helping UC News process millions of data request and content of massive origins everyday with the help of its 3 big data clusters set-up in India. The cluster combines over 5000 machines handling millions of data-request with a response time of less than 10 milliseconds for each, thereby boosting the content generation and distribution on UC News to meet the demands of 80 Million MAUs.