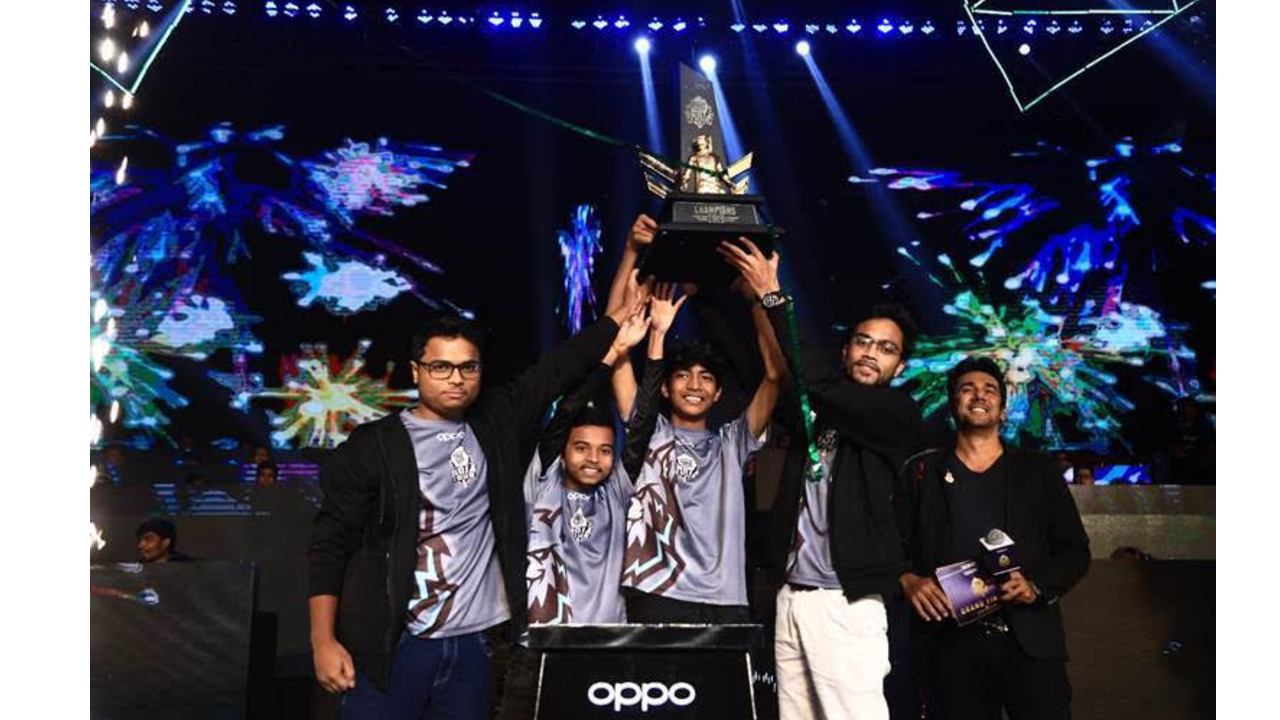 The two-day Grand Finals of the OPPO PUBG MOBILE India Tour (PMIT) 2019 came to a finish with Revenge eSports emerging victorious. Revenge eSports take home the PMIT 2019 trophy along with the prize money of a Rs 50,00,000. ORANGE ROCK and TeamINS follow up in the second & third spots of the tournament, winning cash prizes worth Rs 20,00,000 and Rs 10,00,000 respectively.

It was “edge of the seat” action at Biswa Bangla Convention Centre as the top 20 squads from across India delivered their finest gameplay skills. The finals garnered an overwhelming response from PUBG MOBILE and esports enthusiasts who witnessed a closely contested competition, culminating in the victory of Revenge eSports, followed by ORANGE ROCK and TeamINS in the second and third position, respectively.

A perfect combination of both online events with regional finals in four parts of India, OPPO PMIT 2019 has been the country’s first multi-tiered tournament. Across four groups, the tournament witnessed participation from 400,000 players, with over a million games played in between them. What followed, was the enthralling Grand Finals spread over two days with the top 20 squads battling it out in the biggest esports tournament held in India.

Day I of the PMIT 2019 Grand Finals kicked off with power packed action across all four maps. Team ORANGE ROCK dominated Erangel in round one, while Revenge eSports won the second round played in Miramar. The third round in Sanhok went in favour of TEAM ALL STARS. With two more matches left for the day, Rising Hydra went on to rule the fourth round played in the snow-capped landscape of Vikendi. The last match of the day played in Erangel was won by Revenge eSports, skyrocketing them to the top of the game charts.

Excitement levels doubled up on Day II with ORANGE ROCK once again winning the sixth match of the Grand Finals played in Erangel. The following round played in Miramar went to All Stars, while 8BitRampage took down rest of the squads in Sanhok. The atmosphere inside the arena intensified as the game rankings continued to shuffle. TEAM ALL STARS dealt some serious damage in Vikendi winning the ninth match of the day. The final and the deciding round played in Erangel was won by Rising Hydra.

Following the PUBG MOBILE India Tour, Aneesh Aravind, General Manager, Tencent Games India said – “Our congratulations to team Revenge eSports for winning the tournament with a mix of intelligent squad strategy, clever zone movement and ability to pick up a high number of kills. PMIT 2019 is a manifestation of our efforts towards making esports accessible to every gaming enthusiast in the country. We have successfully curated a world class tournament and look forward to many more to come. Also, we extend our heartfelt thanks to OPPO, our title sponsor for taking the initiative to grow esports in India”.

As is customary with PUBG MOBILE tournaments, the OPPO PUBG MOBILE India Tour also saw numerous players awarded for their distinctive skill set.  The title of ‘The Wanderer’ went to SnowFTW for the longest foot travel. 8BitGill was awarded the titles of ‘Chosen One’ with the maximum MVPs, as well as ‘The Annihilator’, for causing the maximum damage. INSJokerFTW won the title of the ‘Headshot Expert’ for dealing the highest number of headshots.

In team titles, Revenge eSports were named ‘The Exterminators’, with the maximum squad kills. They also won the title of ‘The Grenadiers’, with the highest number of squad grenade kills. A special people’s choice award was also given to 8BitRampage as the fan favourite team basis voting in the PUBG MOBILE game. The popular team was awarded with a game prize of INR 6 lakh.

With an attempt to discover India’s PUBG MOBILE talent from all parts of India, the PUBG MOBILE India Tour 2019 (PMIT) sponsored by OPPO, has been the biggest esports endeavor attempted in the country. For the very first time, the esports community in Kolkata were given an opportunity to witness a tournament of this scale and stature. OPPO PMIT 2019 was a successful continuation of the PUBG MOBILE India Series (Finals at Hyderabad), PUBG MOBILE Campus Championship (Finals in Bengaluru) and PUBG MOBILE Club Open (Regional Finals in New Delhi) which were PUBG MOBILE’s first few initiatives towards building an esports platform for gaming enthusiasts in India.

The experience of the country’s largest esports event was only heightened by some A-list casters from the esports fraternity. The English casting honors were carried out by Asurai, Illustrado, and The Experiment, while the Hindi casting was taken on by the experienced gamers such as RawkneeK18 Gaming, Kronten along with Ocean Pro. These familiar names in the esports circuit came together to give fans a perfect ending to the PMIT 2019. The stream from the grand finals of the OPPO PMIT 2019 that took place on 19th-20th October can be seen here.