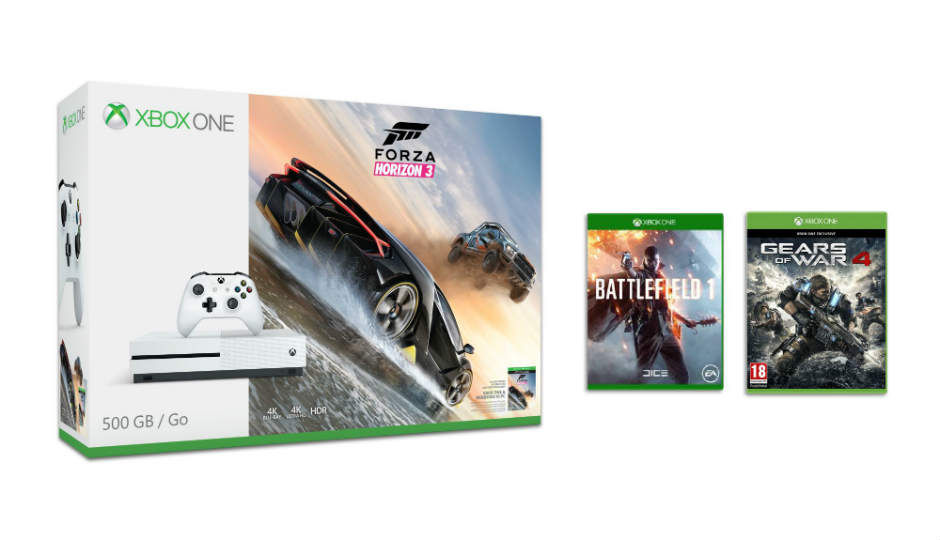 Microsoft announces Xbox One S in India, starts at Rs 29,990

Microsoft has announced the Xbox One S in India, making the device available for pre-orders from Amazon, Flipkart and select retailers. The Xbox One S will be launching in India with the Forza Horizon 3 Bundle and will be available in both 500GB and 1TB storage options, priced at Rs 29,990 and Rs 34,990 respectively. Microsoft is also offering Gears of War 4 and Battlefield 1 for consumers who pre-order the console from Flipkart.

Microsoft today announced that the Xbox One S is now available for pre-order in India starting September 20 from Amazon India, Flipkart and select retailers. The Xbox One S will be launching in India with the Xbox One S Forza Horizon 3 Bundle, available in both 500GB and 1TB storage options with prices starting from INR 29,990.

In addition, customers who pre-order the console from Amazon India, Flipkart and select retail partners will also enjoy the action and excitement Microsoft Studios’ Gears of War 4, and EA’s historic warfare shooter Battlefield 1.

Part of the Xbox family of devices, Xbox One S is 40 percent smaller than the original Xbox One, featuring a sleek, slimline design, “robot white” color and a built-in power supply. The highly-anticipated Xbox One S supports 4K Ultra HD for Blu-ray movies and content streamed from partners like Netflix, as well as High Dynamic Range (HDR) for video and gaming, delivering richer, more luminous colors for a visually-stunning gaming experience. With all the biggest blockbusters, over 100 console exclusives, an advanced multiplayer network, backward compatibility for Xbox 360 games and the original Xbox (selected titles), the Xbox One S is the ultimate gaming and entertainment system for both gaming families and core gamers alike.

“Just in time for Diwali, we’re excited to be bringing the Xbox One S to India, to deliver a new quality of console games to India’s passionate community of gamers. The Xbox One S is an incredible device, packing in all that you need for a complete gaming and entertainment experience. With 4K Ultra HD video content support, HDR support for video and gaming and an incredible line-up of games, including Forza Horizon 3, Gears of War 4 and Battlefield 1, we know that fans will have an awesome time playing on the new console,” said Priyadarshi Mohapatra – Country General Manager, Consumer & Devices Sales, Microsoft India.

Forza Horizon 3 puts you in charge of the Horizon Festival, where you drive, explore, and race all over Australia in more than 350 of the world’s greatest cars. The Xbox One S Forza Horizon 3 Bundle.