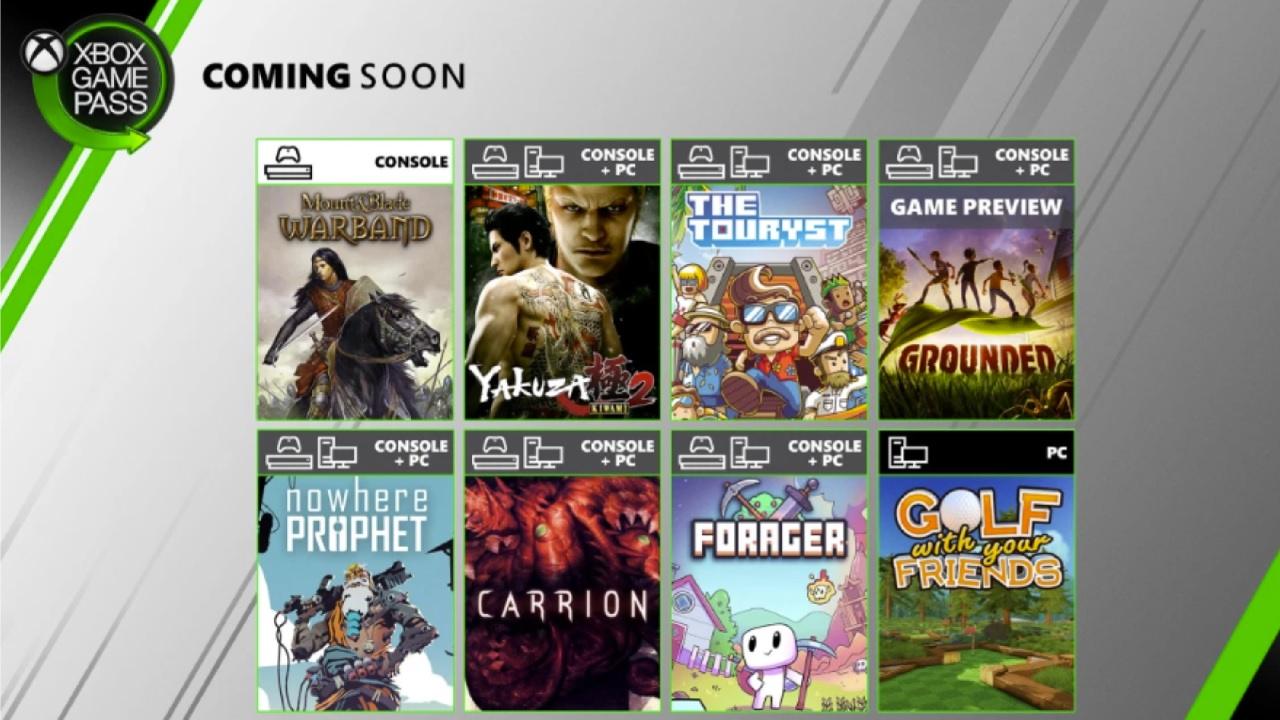 Microsoft via Xbox Wire post announced the several new titles coming to the Xbox Game Pass for Console and Xbox Game Pass for PC libraries beginning Thursday July 16. Today we‘ve got a beefy list of games coming soon, DLC, free game updates, Perks, Quests, and games that snuck in as a surprise since I gave you our last update. Time to rearrange your gaming priority list. Let’s jump in!

Explore, craft, gather and manage resources, find secrets, and build your base out of nothing! Forager is a 2D open world game inspired by exploration, farming and crafting games. Start small, buy land to explore, improve your base, and build your future as you see fit!

In a land torn asunder by incessant warfare, it is time to assemble your own band of hardened warriors and enter the fray. Lead your men into battle, expand your realm, and claim the ultimate prize: the throne of Calradia! Mount & Blade: Warband is a stand-alone expansion pack for the game that brought medieval battlefields to life with its realistic mounted combat and detailed fighting system.

A reverse horror game in which you assume the role of an amorphous creature of unknown origin. Stalk and consume those that imprisoned you to spread fear and panic throughout the facility. Grow and evolve as you tear down this prison and acquire more and more devastating abilities on the path to retribution. Pre-install on console or PC now!

Why have friends if not to play golf… with your friends! Take on multiple mini-golf courses from jungle adventures all the way to a sci-fi space station. Par-tee online with up to 12 players and try your hand at different game modes including classic mode, hoops, and hockey.

The world is a vast, beautiful, and dangerous place – especially when you have been shrunken to the size of an ant. Explore, build, and survive together in this cooperative survival-adventure. Can you thrive alongside the hordes of giant insects, fighting to survive the perils of the backyard? Join our community and help shape the future of Grounded in Xbox Game Preview on July 28.

Join Shyla Schofield, Obsidian’s Social Media Manager, as she shares some of the features that help make surviving easier in Grounded. Find out how unlocking recipes will work, find out how to customize your Hot Pouch, see the different radials in the game and how they can help you out while playing, and more!

Take on the role of a powerful leader and mystic in Nowhere Prophet. Empowered with the gifts of technopathy, the ability to sense and affect electrical currents, you are the last hope to a band of outcastes and refugees as you lead them across randomly generated wastelands. Pick fights with greedy slavers and crazy machines using a unique turn-based card combat system. Can you survive long enough to reach the mysterious Crypt?

You are just arriving at the Monument Islands. Want to go swimming? Or rather take a dive into the deep sea? Or do you want to visit the amusement arcade, do some shopping, dance at the beach party? Fancy some surfing? Or will you talk with the strange old tourist and listen to what he has to say about these ancient mysterious monuments? Explore all of these activities in this action adventure puzzle game!

An assassination threatens to erupt an all-out war between the Tojo Clan and the Omi Alliance. Kazuma Kiryu, the Dragon of Dojima, must travel to Sotenbori, Osaka in an attempt to broker peace between the rival clans, but Ryuji Goda, the Dragon of Kansai, will stop at nothing to get his war. Play this classic installment in the acclaimed Yakuza saga with Xbox Game Pass.

In Case You Missed It

We snuck in a few surprise games – just trying to keep you on your toes. Here are a few that are available now!

The sequel to the two-time Unity-award winning Endless Space! Endless Space 2 is Amplitude Studios’ turn-based 4X space-strategy game that launches players into the space colonization age of different civilizations within the Endless universe.

Finish the fight between the Covenant, the Flood and the entire human race in the dramatic, pulse-pounding conclusion to the original Halo trilogy. Relive 11 unforgettable missions and fight through 24 multiplayer maps, complete with enhanced Spartan customization and an all-new progression system spanning each game within Halo: The Master Chief Collection.

Unleash the power of Grim Squad in Neon Abyss, a frantic, roguelite action-platformer where you run ‘n’ gun your way through procedurally generated dungeons to take down the New Gods. Featuring unlimited item synergies, a unique dungeon evolution system and a host of mini-games – you can even hatch and evolve pets to cause more carnage. Each run diversifies the experience and every choice alters the ruleset.

Gears 5’s newest update, Operation 4: Brothers in Arms, brings the largest one-time drop of characters since launch and completes the original Delta Squad with Dom Santiago. The update also streamlines progression, rewards, and introduces a new ranking system. The update is free to all Gears 5 owners and will be available as of yesterday.

The sky is calling. Experience the joy of flight in the next generation of Microsoft Flight Simulator available with Xbox Game Pass for PC on August 18th. From light planes to wide-body jets, fly highly detailed and accurate aircraft. Test your piloting skills against the challenges of night flying, real-time atmospheric simulation and live weather in a dynamic and living world. Create your flight plan to anywhere on the planet. The world is at your fingertips.  Xbox Game Pass members can pre-install now, so you’re ready to play on day one!

Upload your consciousness and get ready to run in this infinite cyber-parkour course where one wrong step can be the end of you. You’re tasked with carrying an energy core without dropping it while the world behind you deteriorates! Also, did you know that you can purchase Minecraft for Xbox One at a discount using your Xbox Game Pass membership? And if you want to plus up your experience, both the Master and Starter collections have more DLC included and are also discounted for Xbox Game Pass members.

Overcooked! 2 Sun’s Out Buns Out – Free Console Update Out Now!

Overcooked! 2 is bringing you a new helping of chaotic cooking with a celebratory free update on Xbox One. Are you ready to parade through the Onion Kingdom to five new kitchens? Expect lots of fireworks, confetti, and floats to really heat up your gameplay. New dog chefs at the ready, play the free Sun’s Out Buns Out update on July 16!

We have two brand new Perks for Xbox Game Pass Ultimate members that launched on July 14 and can be claimed right now! (Bonus tip: You can see all the perks and claim them from the Xbox (Beta) App for Windows 10!)

Charge into battle with an exclusive mount and boost your adventure with Valor Perks and 1,000 Lumena. Unleash your potential and fight your way to victory!

Unlock the Gods for Avatar! Claim your Avatar Starter Pass including 3,000 Battle Pass Points, instant access to Merlin, Skadi, Susano and their Voice Packs, and a Daily Deal Token.

July Quests have arrived! There are dozens available, but here’s a few for all Xbox Game Pass members:

We gave you a big list of games coming soon and game updates and DLC… but you might also want re-prioritize what games you’re playing now to wrap these gems up before they’re gone. Not ready to say goodbye? Use your membership discount to get these games for up to 20% off while they are still in our library and play them any time!

Remind your friends if they want to get in on this pile of games, they can try their first month for $1! We’ll update you when each of these games are available to play on Twitter and Instagram, and in the meantime we’re going to start planning out our first flight path. Cheers!

Intel and Marvel’s Avengers give you the chance to upgrade your gaming with an INR 4,00,000 sweepstakes Previous Post
Flipkart has launched its MarQ Smart TVs in India with prices starting at Rs 11,999 Next Post