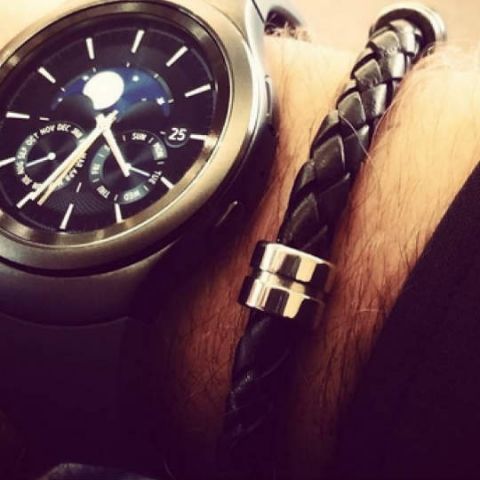 The latest leak gives a sneak peek at the second generation renditions of the Moto 360 and Samsung Gear S2 smartwatches, ahead of the upcoming IFA 2015. Both the smartwatches have round displays, and will possibly be unveiled at IFA 2015, which begins from September 4th.

You could be forgiven for thinking that the second-generation Moto 360 is the first generation one, as the two look very similar. One key difference, however, is that the second generation watch has the sleep-wake button at the 2 o'clock position, whereas the first generation Moto 360 had the button at a standard 3 o'clock position. According to the leaks, the new Moto 360 will be available in 2 colours – black and silver. The smartwatch will come with black metal link and brown leather strap, respectively.

Samsung executive Dennis Miloseski, on the other hand, showed off the Samsung Gear S2 on Instagram. “Giving the new Samsung Gear S2 a test drive”, read his Instagram post. The original Samsung Galaxy Gear smartwatch had a rectangular design, whereas the Gear S2 has a round design. The Instagram post links out to Samsung’s mobile press page, which reads, “Next is Now”.

As far as specifications of the two devices are concerned, we will have to wait till IFA 2015 to find out. As for the looks, both the smartwatches seem to have an attractive design. We think that the Moto 360 2nd gen. will sport a new version of Android Wear, while Samsung will showcase what its Tizen OS can do on a smartwatch.

The Moto 360 and the Samsung Gear S2 aren’t the only smartwatches to look out for at IFA. We expect to see the launch of a number of smartwatches from the likes of Huawei, Asus, LG, Sony and more.

What do you think? Will Samsung and Motorola captivate the market with their latest smartwatches, or will they be lost in monotony like most wearables in their category?