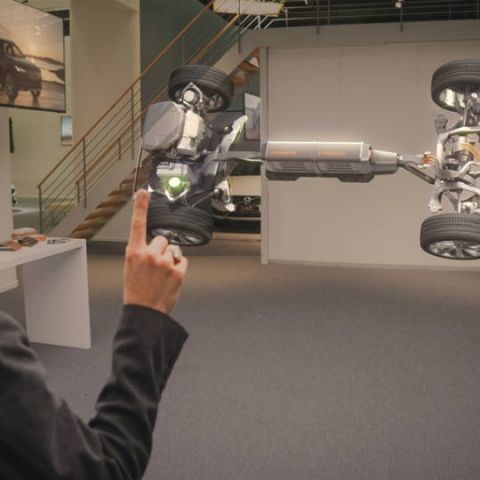 While companies like Oculus, Sony, and HTC have taken the VR route, Microsoft has gone with augmented reality in its upcoming headset, the HoloLens. The company showed off a spectacular demo of what the headset is capable of at E3 2015, and at the USA launch of the Lumia 950.

Things have not changed since then. At an event in Tel Aviv, Bruce Harris, a Microsoft Technical Evangelist, shed some light on the battery life and connectivity options of the HoloLens. He stated that any universal Windows 10 application can run on the HoloLens, out of the box. The HoloLens need not be connected to a PC via a wire. It uses Wi-Fi and Bluetooth, thus making it completely wireless. He also stated there there would be no wired variant of the headset available. Coming to the battery life of the headset, the device will last for 5.5 hours of regular usage, and under heavy use, the headset will last for about 2.5 hours. Oculus recently announced the Rift headset's pricing of $600, and a high-end gaming PC requirement to function. It also comes with a sensor, detachable headphones and an Xbox One controller in the box.

Coming back to the HoloLens, the field of view from the headset is similar to a 15-inch monitor being viewed from a distance of about two feet away. The justification for this is because the load it will have on battery life. No pricing information or availability of the headset has been announced.

At launch, the HoloLens will go head-to-head against the PlayStation VR when it comes to gaming on the home console. On the PC front, we have the Oculus Rift headset, which was the first in the mainstream VR headset market to announce pricing and availability. There are a bunch of VR headsets available in the market, from Samsung Gear VR to Google Cardboard, based on your budget. None, however, can connect to a PC or a PS4/Xbox One to give you an in-depth immersive gaming experience.

Looking at the battery life of the HoloLens, we can’t help but remember the Google Glass. The headset was conceptually amazing, but suffered with battery life.