A 43-inch TV under the Realme brand has been listed on BIS. The filing carries the name “Realme TV 43” The BIS listing also reveals the panel on the Realme TV will be an LED panel

Realme has already declared its intention to go beyond manufacturing just smartphones and enter into lifestyle tech products. That has so far included a few pair of wireless headphones and a fitness band. But the young upstart also plans to launch its own TV in Q2, 2020, and thanks to BIS certification filings, we have some more information regarding the upcoming Realme TV.

According to a leakster, the Realme TV has popped up on the BIS (Bureau of Indian Standards) website. The filing carries the name “Realme TV 43” with the model number JSC55LSQL. Looking at the name, it’s easy to guess this particular model will come with a 43-inch panel. 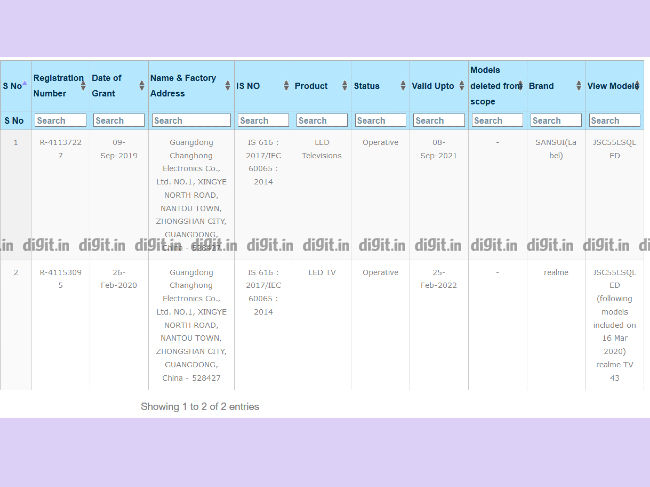 That’s not the largest screen we have seen on a Smart TV but it does indicate that Realme will be aiming at the affordable segment. The certification was granted on February 26, 2020. Only one TV model is listed.

Furthermore, the listing reveals the panel on the Realme TV will be an LED panel. Interestingly, searching with the model number on the BIS website also reveals another listing (with the same model number). This one’s labelled Sansui, a Japanese brand that makes audio-video equipment. Both models appear to have been manufactured in the same factory in Guangdong, China.

This is not a confirmation, however, that only one variant of the TV will be launched in India. For now, at least, it’s pretty certain that a 43-inch TV from Realme will land in India. It’s most likely to be powered by Android TV with some customisation done by the company. Considering the listing, the TV is also expected to launch sometime in this quarter.