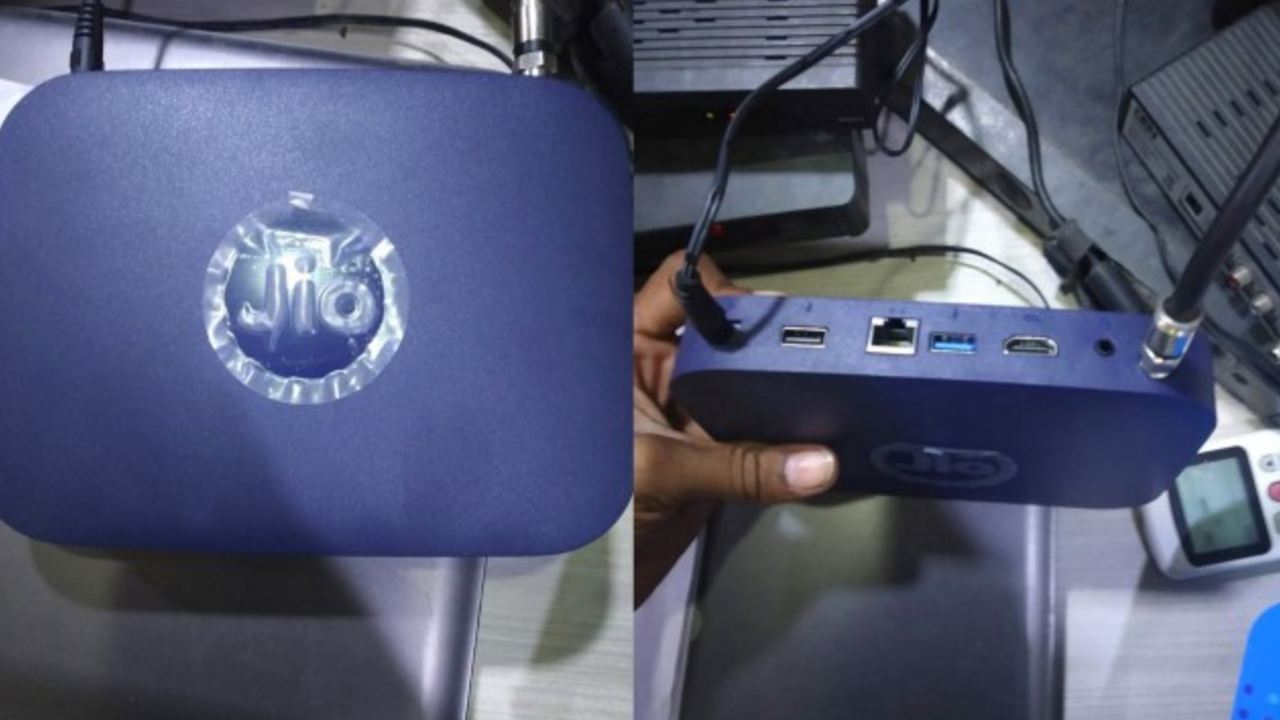 The smart hybrid STB will be available for free with Reliance Jio Fiber's annual plans.

Exact details of the plans will be revealed on September 5.

Reliance Jio announced a new set top box (STB) at the Annual General Meeting, which is always full of consumer-focused announcements. The smart hybrid set top box is more than just a broadcast receiver. It will let you play and stream games, call any operator or device, including video conferencing and watch the latest movies on the day of release. And, the first images of the device have leaked.

The images shared by DreamDTH showcase the Reliance Jio hybrid STB. It has company’s branding on it and sports a blue colour. The STB can be seen carrying a number of connectivity ports like an entry port for the coaxial cable of the MSO, an Ethernet RJ45 port, one USB 2.0, an HDMI port, and one USB-3 port. At present, the software information is still unavailable. However, the Reliance Jio smart STB is tipped to run Android OS with custom UI.

Reliance Jio has plans to reach 15 million households and 20 million establishments in the next 12 months across the country with Jio’s home broadband service. The STB will also be offered to local cable operators. It will offer the largest bouquet of channels to customers, according to Ambani, in ultra high definition and double up as a smart home hub.

Reliance Jio now has majority stakes in Hathway, GTPL and Den which are major Multi System Operators (MSOs). As explained by DreamDTH, this is because “earlier Jio had plans of launching Tv services as IPTv riding on its own fiber internet service through the Jio Tv app installed in its Android based STB. Later Jio faced severe resistance from local cable operators (LCOs) who would lose their livelihood as people would disconnect cable connections and move to Jio's IPTv service. LCOs could indulge in fiber cutting and damage Jio's infrastructure in order to safeguard their business.”

Reliance Jio smart hybrid set top box will be able to host video conferencing to just about any device with a Jio connection. The company showcased a live demo of the service where a set-top box was able to make a call to a phone right from the conference. Moreover, the smart hybrid STB will support “console-grade” gaming. Jio says it has an in-built graphics card. A live demo was showcased at the AGM where Akash Ambani played a game of FIFA to show off the console’s set-top box’s graphical chops. It had zero latency. However, it is still unclear what gaming platform it supports.

To further the STB’s gaming capabilities, Jio announced a few key partnerships with companies like Gameloft, Tencent and more, indicating that the set top box is going to be playing Android games. You can read more about how Reliance New gaming console is a set top box here.

Ambani said that JioFiber customers who opt for the company’s annual plans, which is called Jio-Forever plans, will get an HD or a 4K LED television and a 4K set-top-box free. However, exact details of the Jio Fiber plans will be revealed on September 5.