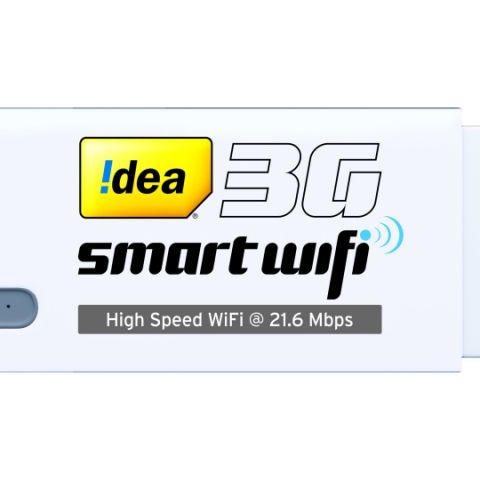 The operator says its dongle is capable of connecting as many as 10 devices simultaneously. The plug and play Idea dongle is said to deliver 21.6 Mbps download and 5.76 Mbps upload speed. Other highlights of the dongle include message management, including outboxes, inbox, draft box also supports sorting by time etc.

Idea 3G Smart Wifi dongle offers 21.6 Mbps download and 5.76 Mbps upload speed and is equipped with an inbuilt Wi-Fi antenna which can also run on minimal power sources like laptop or car charging point to turn the device into a Wi-Fi Hotspot. The Idea 3G Smart Wifi is truly plug n play device, compatible with all major operating systems over Wifi.

Talking about the new device, Mr. Sashi Shankar, Chief Marketing Officer, Idea Cellular, said, “We realize the need for reliable, high-speed, and convenient internet access for SOHO and business professionals in semi-urban pockets of the country. The Idea 3G Smart Wifi dongle will cater to this market need and empower users with high speed internet connectivity leading to productivity and growth. The new device further strengthens our 3G devices portfolio which will help us gain 3G market share in the country.”

·         The device offers fast and reliable services with 21.6 Mbps download and 5.76Mbps upload speed along with activated Wi-Fi through PC or compatible USB Adapter.

·         Idea 3G Net Smart can be connected with the USB interface of the computer or the power adapter in the car or any other compatible charger external power source.