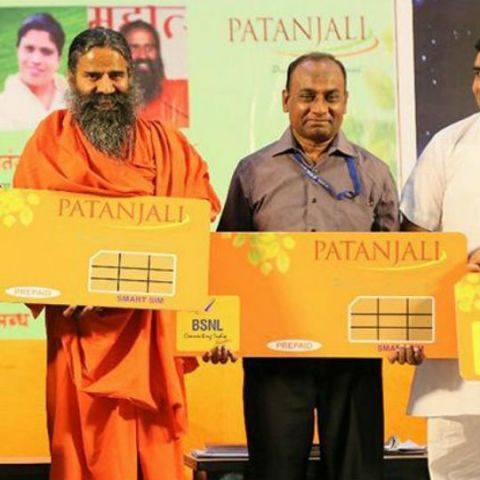 The SIM connections are currently available for the company's employees only and offer 2GB data with unlimited calling for Rs 144.

The telecom sector has grown highly competitive ever since Reliance Jio entered the fray with its cheaper services and offerings. However, one new contender has entered the competition and its none other than Yoga guru Baba Ramdev's Patanjali. Patanjali has teamed up with Bharat Sanchar Nigam Limited (BSNL) to launch its Swadeshi Samriddhi SIM cards, which are currently only available for the company’s employees and office bearers. Patanjali is offering 2GB data, unlimited voice calling and 100 SMS with its SIM connection for Rs 144.

There are also some additional benefits to those who avail the services. Customers will also get a 10 percent discount on Patanjali products via the SIM. Users of the Swadeshi Samriddhi SIM cards will also be covered by a medical insurance of up to Rs 2.5 lakhs and life insurance of up to Rs 5 lakhs. It is not known yet whether or not one will have to perform some set amount of recharges for availing the medical benefits, same as some other telecom operators.

As per an ANI report, on the announcement of telecom services, Baba Ramdev said that both BSNL and Patanjali want the welfare of the country with their services.  He further clarifies that insurance will be covered only in the case of a road accident. Sunil Garg, BSNL Chief General Manager, who was also present at the launch event said, “Patanjali's plan is BSNL's best plan. In Rs 144, one can make unlimited calls from any part of the country. We are giving 2GB data pack, 100 SMS. The members of the Patanjali has to just show their identity and there SIM will be activated soon after some paperwork.”