Yu Televentures' Founder, Rahul Sharma announced on October 6 that the company is coming up with the most powerful phone on the planet. Today, the company has teased that the upcoming phone will be sporting an all metal body. Rahul Sharma also took to the Yu forums and besides creating hype about the product, revealed that the final work is in progress.

While specs of the said phone havn’t been revealed by the company, the rumors surrounding the smartphone suggest it will have a flagship like spec-sheet. The phone might feature a Qualcomm Snapdragon 810 SoC and 4GB of RAM. As for storage, at least 32GB of on-board storage is expected. Rumors about the camera module being used on the Yu Yutopia suggest that the phone might have a 21MP rear camera and an 8MP front-facing camera. Earlier, it was rumored that the phone might get a 13MP rear snapper. Information about the display and battery size is still disputed at the moment.

Recently, a mystery YU device was found on Geekbench, powered by an octa-core Qualcomm Snapdragon processor. The device which is code-named YU5050 could be the Yu Yutopia which is the phone in question. It scored 1353 points on single core test of Geekbench and a commendable 4622 on the multi-core test. According to the geekbench results, it features 4GB of RAM and is running on Android 5.1.1. 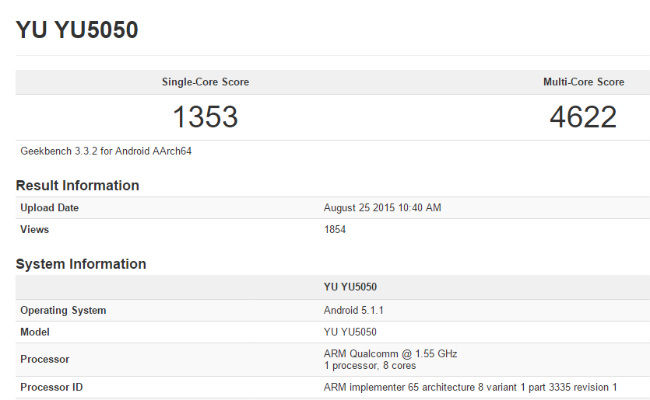 If the rumors about the phone are true, Yu will be competing against other flagship phones in the market. Also, if Yu maintains its low pricing scheme, Yutopia might be going up against the OnePlus 2. The OnePlus 2 features a Qualcomm Snapdragon 810 SoC, 4GB of DDR4 RAM, 13MP rear camera with OIS and laser assisted autofocus. It also sports a fingerprint sensor and now comes with dual-SIM slots. However, if the Yu Yutopia really wants to compete for the top spot, it will have to beat the Samsung Galaxy S6 which is the market leader currently.