You can now pre-order the LG G6 in India. Here are all the deals on offer 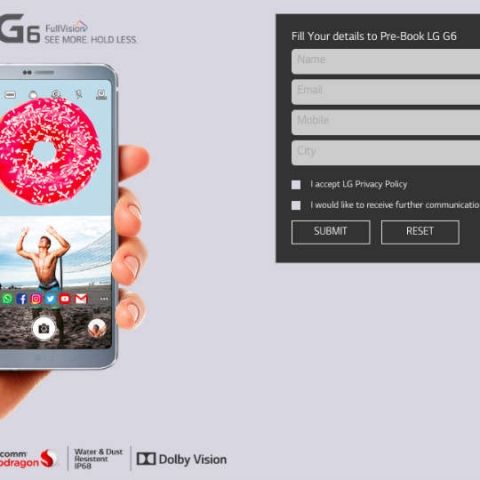 LG announced the G6, its 2017 flagship at MWC 2017 and the device will be unveiled in India on Monday April 24. You can however pre-book the device on LG’s website today. There are special offers available to those that decide to pre-book the smartphone. LG is offering cashback upto Rs. 7000 for pre-bookings. LG is also offering 50 percent off on the LG Tone Active+ HBS-A100 wireless headset to those that pre-book the LG G6.

Cashback of up to Rs. 7000 is valid till May 1. This includes Rs. 2000 cashback for pre-booking the device. A separate cashback of Rs. 5000 will be available for those that book the device after May 1 and will be valid till May 31. The cashbacks are applicable for SBI and HDFC Bank card holders only.

If information circulating the Internet is to be believed then the LG G6 is expected to be priced around the Rs. 53,000 mark. Samsung recently unveiled the Galaxy S8 and S8+ priced at Rs. 57,900 and Rs. 64,900 respectively.

The LG G6 was unveiled at MWC 2017 and is a combination of metal and glass, with metal edges and glass front and rear panel. The smartphone runs on Android 7.0 Nougat out-of-the-box skinned with LG’s UX 6.0. It has a 5.7-inch QHD+ display (1440 x 2880 pixel resolution) and an 18:9 aspect ratio more commonly known as 2:1. Under the hood, the G6 is powered by the Qualcomm Snapdragon 821 platform coupled with 4GB LPDDR4 RAM. The device comes in two storage variants - 32GB and 64GB expandable up to 2TB via a microSD card.

A 3300mAh battery powers the entire package and the device is expected to be available in Astro Black, Ice Platinum, and Mystic White colour options.

What remains to be seen is how the smartphone performs when compared to the Samsung Galaxy S8 and S8+ which have been announced in India.