Xiaomi’s Redmi Note series have steered the company to the top spot in the Indian market but when the company oddily launched an upgrade within just 8 months of launching the Redmi Note 5 Pro, it was said to be playing catch up with its competitors in the same price bracket. The Chinese company now seems to be looking to up-the-ante and as seen on Geekbench, it is working on the Redmi Note 7 powered by the Snapdragon 660 mobile platform. 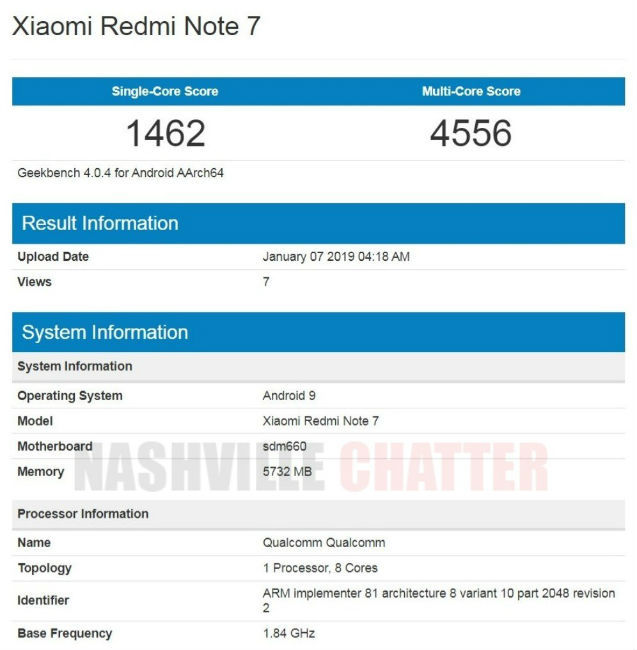 Xiaomi seems to have sensed that it needs to deliver more power in that price bracket, and not only is it seen working on the Redmi Note 7 with a more powerful processor, as per the Geekbench listing, the company is also bringing the latest Android 9 Pie OS on it. The Geekbench listing also shows that the Redmi Note 7 has 6GB of RAM. In the single-core and multi-core tests, the device has scored 1462 and 4556 points respectively. No other information has been revealed by the listing.

The listing appears a few days ahead of Redmi’s launch event on January 10. Xiaomi’s sub-brand could be announcing a Redmi phone with a 48MP camera sensor at the event. While some claim that the company may launch the Redmi Pro 2, some say that the phone could be the Redmi 7. A recent report suggested that this upcoming phone may have a USB Type-C port for charging - something that has been lacking in Xiaomi branded phones.