The Redmi Note 7 could be announced in 3GB and 4GB RAM variants, while the Redmi Go might be launched with 8GB storage. 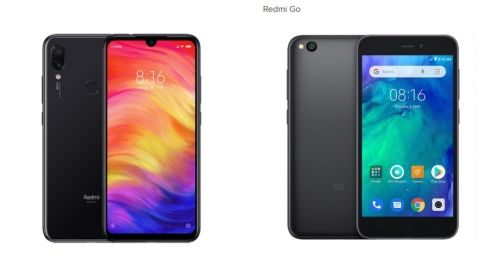 Xiaomi has already announced its Redmi Note 7 smartphone in China and has been teasing the phone in India from some time now. It’s expected to be soon announced in India, along with another phone, the Redmi Go, which is the company’s first Android Go handset. Now, the tipster Ishan Aggarwal tweets that the Redmi Note 7 and the Redmi Go smartphones will launch in India and he also details the variants they might be announced in. As per the tweet, The Redmi Note 7 will be announced in 3GB RAM/32GB storage and 4GB RAM/64GB storage variants, and in Black, Blue and Red colour modes. The Redmi Go is supposed to come with 1GB RAM and 8GB of storage. It also comes in another variant with 16GB of storage. Additionally, the smartphone is said to launch in Black, Blue and Red colour variants in India.

The Redmi Note 7 has been in the news from some time now, mostly because of its ‘durability tests’ the company does and the 48MP camera it comes equipped with. The device is equipped with a 6.3-inch LCD panel that has a 2340x1080 pixel resolution. It is powered by the Qualcomm Snapdragon 660 SoC and in China, it’s listed in 3GB, 4GB and 6GB RAM variants with 32GB or 64GB storage options.

The camera unit on the Redmi Note 7 is vertically aligned in the top-left corner with a single LED flash. As mentioned, the device comes with a 48MP sensor and is combined with a 5MP secondary sensor for enabling portrait shots. The 48MP sensor is developed by Samsung and features ultra-small 0.8um pixels, which cram together to deliver a total of 48 megapixels in the sensor. The Redmi Note 7 Pro is also in the works, which will be equipped with the 48MP Sony IMX 586 sensor. On the front, the Redmi Note 7 sports a 13MP shooter that come with AI-based algorithms for face beautification and portrait mode. It is backed by a 4000mAh battery, that is claimed to deliver one and a half day’s run time on a single charge.

The Redmi Go is Xiaomi’s first smartphone running on the lightweight Android Go operating system. It features a 5-inch HD 16:9 display with 1280x720p resolution and is powered by the Qualcomm Snapdragon 425 Processor, which can clock speeds of up to 1.4GHz. The smartphone comes with 1GB RAM, with options to choose from 8GB and 16GB of internal storage.

In terms of optics, the Redmi Go is equipped with a single 8MP rear camera that has 1.12μm pixel pitch and f/2.0 aperture. There is also a single LED on the back and the main camera can support shooting up to 1080p quality video. On the front, it sports a 5MP camera that has an f/2.2 aperture and the same pixel pitch as the rear camera. The dual-SIM smartphone supports microSD card storage expansion and is backed by a 3000mAh battery. In the Philippines, the smartphone is priced at PHP 3990 (Rs 5,433 approx) and is expected to be priced slightly lower in India.