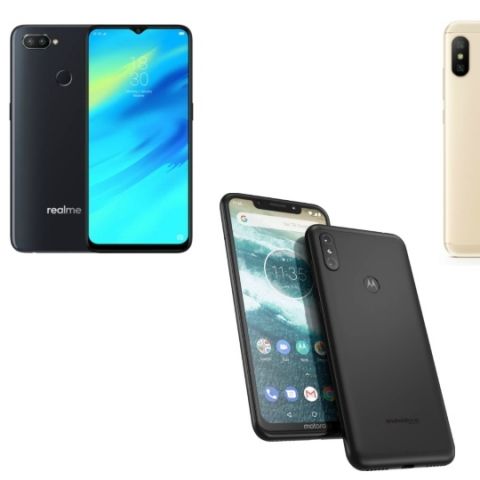 The four smartphones have their own merits and demerits against each other and we list them all out here. While the Redmi Note 6 Pro’s price is yet to be announced, we expect it to be a mid-range device that will replace the Redmi Note 5 Pro.

Xiaomi will launch its Redmi Note 6 Pro on November 22 in India and it will replace the company’s Redmi Note 5 Pro, which was launched just six months ago. The phone will also compete with the offerings from many other smartphone manufacturers, the most notable ones being the Realme 2 Pro (review), the Motorola One Power and the company’s own offering, Mi A2. While the price of the Redmi Note 6 Pro is bound to influence the mid-range smartphone segment, there are very few new things that it brings to the table when compared with the Redmi Note 5 Pro. Here, we will compare the specs of all the aforementioned phones to figure out who stands on top, at least on paper.

While our brains think of the processor when it comes to performance, but do note that there are many other things that can influence it. As one would expect, the Redmi Note 6 Pro and the Motorola One Power (review) are powered by the Snapdragon 636 and the clock speed is set to 1.8GHz on both the phones. This means that on paper, the two handsets should exhibit equivalent performance, be it while gaming or when multitasking and switching between apps.

The Qualcomm Snapdragon 660 powers the Realme 2 Pro and the Mi A2. These two phones have the advantage over the previous two handsets with a newer chip that features upgraded high-performance cores and is clocked higher. While the SoC on the Realme 2 Pro can vary between 2.0 GHz and 1.8GHz, the same SoC is clocked to perform between 2.2 GHz and 1.8GHz. This means that Mi A2 should, theoretically, be able to perform better when it comes to computationally intensive tasks and yes, this includes gaming as well.

All the phones flaunt a Full HD+ panel but they vary in terms of size and resolution. The Redmi Note 6 Pro feature a 6.26 inch IPS LCD display with 2160 x 1080 pixels resolution and the Realme 2 Pro gets a 6.3-inch display with the same panel but with a slightly higher resolution of 2340 x 1080 pixels. The Motorola One Power and the Mi A2 (review) sport a 6.3 inch and 5.99-inch display with a 1080 x 2246p and 2160 x 1080p resolution respectively. These two phones feature LTPS IPS LCD displays that can deliver higher resolution but their respective companies haven’t utilised this to their benefit since the resolution they sport is in the same ballpark as the other two handsets.

Overall, the four phones feature similar display technologies but their respective manufacturers will surely calibrate their displays in their own way. Additionally, there’s a notch on all the phones, except the Mi A2. While the Redmi Note 6 Pro and the Motorola One Power come with a standard rectangular notch, which some users might not like, the Realme 2 Pro sports a dewdrop notch on top of its display that is said to be less intrusive.

While Google Pixel series of smartphones come with a single camera and are capable of capturing stunning images, this is not the case when you come down to the mid-range smartphone segment. All the phones in this comparison come equipped with a dual camera setup and the megapixel count, and pixel and aperture size is almost the same.

The Realme 2 Pro is equipped with a 16MP Sony IMX398 primary 6P sensor with f/1.7 aperture, which is complemented by a 2MP secondary lens. The phone gets dual-pixel fast focusing and EIS video recording capabilities. On the front, it sports a 16MP lens with f/2.0 aperture. The phone comes with the new AI Shot feature that can apparently recognize 296 facial identification points and offer eight million personalised beautification solutions.

The Motorola One Power comes with a 16MP + 5MP dual-rear cameras that feature f/2.0 aperture and 1.12μm pixels. On the front, it sports an 8MP sensor with f/2.2 aperture, which supports portrait mode.

The Mi A2 also comes with a dual-camera system that has a primary 12MP Sony IMX486 sensor with 1.25-micron pixels and a secondary 20MP Sony IMX376 sensor for portrait shots. Both the lenses have a f/1.75 aperture. There’s a 20MP front camera with a Sony IMX376 sensor and Xiaomi's Super Pixel Technology. The front shooter features AI-powered Symantec Segmentation that is said to enable enhanced bokeh effect and HDR for better quality photos.

Battery life is crucial and can make or mar the experience on a phone. However, advancements from flagship level devices often trickle down to mid-range phones and this helps a device last longer and charge faster. The Redmi Note 6 Pro runs on the same 4,000mAh battery as its predecessor and the company claims it can last up to 2 days on a single full charge. The Mi A2 and the Realme 2 Pro lag behind in terms of battery capacity since they are powered by 3010 mAh and 3500 mAh respectively. However, the battery life will vary depending upon the individual’s usage and these two handsets might last more than an entire workday for a layman on moderate usage. The Motorola One Power comes packed with a 5000 mAh battery that supports the company's TurboPower charging tech. The company says that the phone can deliver up to 6 hours of power in 15 minutes of charging.

While the Redmi Note 6 Pro and the Realme 2 Pro still cling on to the micro-USB charging port, the Motorola One Power and the Xiaomi Mi A2 get a Type-C port.

Coming to the pricing of the Redmi Note 6 Pro, is expected to be priced the same as its predecessor. Rumours circulating on the internet suggest that its 4/64GB model could cost Rs 14,999 while the 6GB RAM model could be priced at Rs 15,999. Read Six things to know about the new mid-range smartphone here.