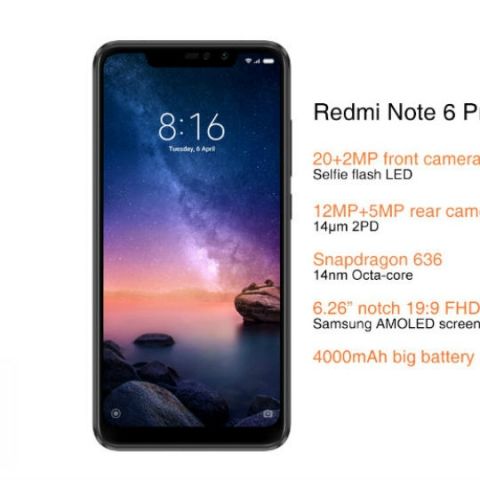 Xiaomi may soon launch the Redmi Note 6 Pro in India, and as per a leak, the smartphone may be offered in two variants and four colours in India. The handset was unveiled in Thailand last month in one storage variant and in three colours. Most of the hardware in the Redmi Note 6 Pro is same as its predecessor the Redmi Note 5 Pro (Review) but there are significant changes when it comes to design and display.

According to a report by mysmartprice, the Redmi Note 6 Pro is expected to launch in two variants - 4GB RAM + 64GB storage, and 6GB RAM + 64GB storage. The storage can be expanded up to 256GB. In India, Xiaomi could launch the smartphones in four colours: Rose Gold, Black, and Blue and Red. In Thailand, the company only launched the 4GB RAM + 64GB variant and offered the device in Black, Blue and Rose Gold colours.

The Xiaomi Redmi Note 6 Pro was launched with a Qualcomm Snapdragon 636 processor, which is the same SoC that the company used in its predecessor, the Redmi Note 5 Pro (review). Though the SoC is the same, it does feature a slightly larger 6.26-inch full-HD+ IPS LCD notched display with a 19:9 aspect ratio. Xiaomi says that it sports 86 percent screen-to-body ratio, and its screen is protected by a 2.5D Corning Gorilla Glass with 500 nits of brightness. The Redmi Note 5 Pro does not have a notch on the 5.99-inch display and sports 18:9 ratio. We have already mentioned that the smartphone is expected to launch in two variants and four colours.

When it comes to the camera, the Redmi Note 6 Pro comes equipped with a 12MP + 5MP dual-camera system. The 12 MP sensor features a f/1.9 aperture with 1.4um pixels and supports dual auto-focus. The second one is a 5MP depth sensor. On the front, it sports a 20MP main sensor that supports pixel binning and a 2MP depth sensor. The smartphone is powered by a 4000mAh battery, which the company claims can last up to two days on a single charge. Xiaomi priced the smartphone at a price of THB 7,000 in Thailand, which directly converts to approximately Rs 15,800. It is expected to be priced the same when it launches in India.