Xiaomi Redmi Note 5 launched in India starting at Rs 9,999, will be available as Flipkart exclusive

The Redmi Note 5 is launched in options of 3GB/4GB RAM with 32GB and 64GB memory options, whereas the Note 5 Pro comes in three variants of 3GB RAM/32GB ROM, 4GB/6GB RAM coupled with 64GB storage. 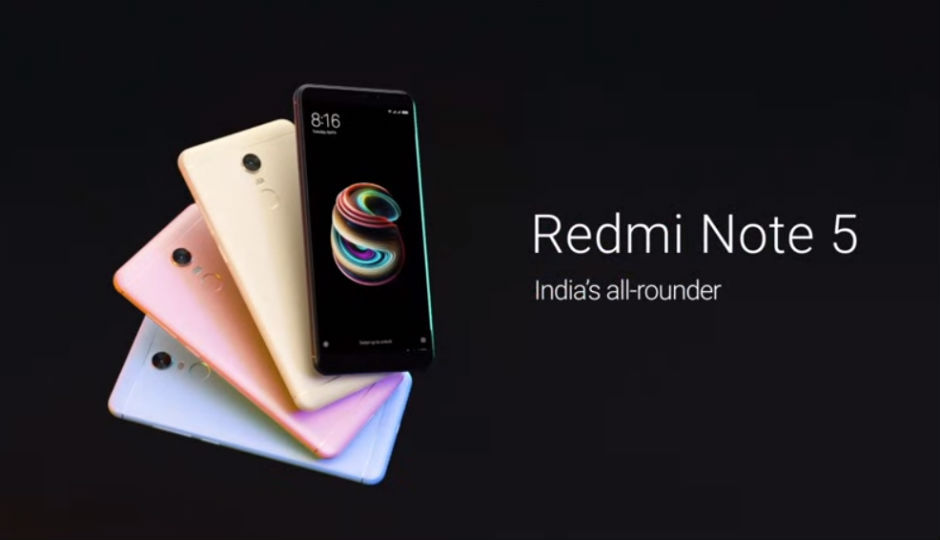 Xiaomi Redmi Note 5 launched in India starting at Rs 9,999, will be available as Flipkart exclusive

Xiaomi has launched its first smartphones of 2018 in India, the Redmi Note 5 and the Redmi Note 5 Pro. As expected, both the Redmi Note 5 and the Note 5 Pro sport an 18:9 display aspect ratio and feature a metal unibody design. They will be available in Black, Gold, Rose Gold and Blue colour models. Xiaomi is offering the ultra slim case free with both the devices. The device will be available exclusively from Flipkart, Mi.com. Mi Homes and will go on its first sale starting February 22. Jio is also offering a Rs 2,200 cashback with the device along with 100 percent free 4G data.

The Redmi Note 5 features a 5.99-inch FHD+ 18:9 display with 2160 x 1080p resolution. Akin to its predecessor, It is powered by the Qualcomm Snapdragon 625 SoC with Adreno 506 GPU. The smartphone features a single 12MP rear camera with f/2.2 aperture lens and an LED flash. It comes with a 5MP front-facing sensor, which is capable of recording Full HD videos and comes with a Beautify 3.0 feature for selfies along with an LED flash.

The smartphone runs on MIUI 9 on top of Android Nougat and is backed by a 4000mAh battery. The company claims that it can deliver up to 14 hours of video playback, 27 hours of audio, and nearly 8 hours of continuous gaming. The smartphone feature a rear placed fingerprint scanner and supports connectivity options like Wi-Fi, GPS, Bluetooth and comes with a micro-USB port for charging.