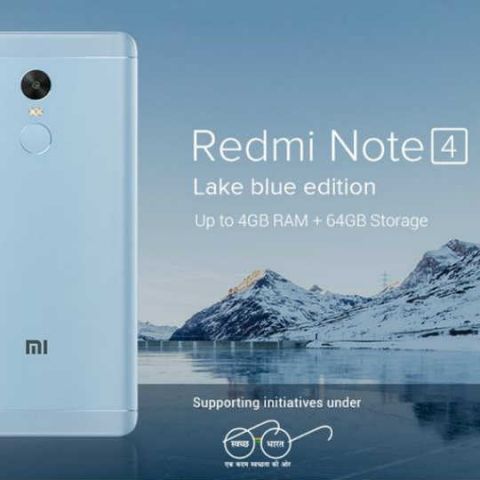 Xiaomi has announced the launch of a lake blue colour variant of its best-selling Redmi Note 4 smartphone in India. Xiaomi says the new lake blue variant will support government's Swacch Bharat Abhiyan mission and initiatives like reviving lakes. Manu Jain, Xiaomi India VP tweeted that part of the proceeds from the sales of the new colour variant will go towards these efforts.

The newly announced lake blue variant goes on its first sale today at 12 noon from Flipkart, Mi.com, Mi Home and Mi preferred partners. With this new addition, the Redmi Note 4 will now be available in black, dark grey, gold and lake blue colour options. While all other three variants are available in three storage variants, the lake blue variant will only be available with 4GB RAM and 64GB storage option. The design and overall specifications of the handset remain the same.

Xiaomi claims to have sold over 5 million units of the Redmi Note 4 in India since its launch in January. The new colour option will serve as a differentiator to those planning to buy the smartphone. In terms of features, it sports a 5.5-inch full HD display and is powered by Qualcomm's Snapdragon 625 chipset.

The Redmi Note 4 features a 13MP rear shooter with phase detection autofocus and a 5MP front camera. The handset runs MIUI 8 based on Android 6.0 Marshmallow, but has started receiving MIUI 9 based on Android 7.0 Nougat in a staged manner. The smartphone's USP is the beefy 4100mAh battery and will be available at Rs 12,999.