The update makes the Xiaomi Redmi 2 an out and out favourite in the budget smartphone segment and possibly an unparalleled device.

If there was ever a time to say ‘Xiaomi has done it again,’ it’s now. The company has officially updated its recently launched Redmi 2 smartphone, less than a month after it was announced. The new version of the Redmi 2 will feature a Snapdragon 410 SoC along with 2GB of RAM and 16GB internal storage. That, at a price point of $110 (approximately Rs. 7,150).

The version of the Redmi 2 that had been announced earlier had similar specs as the Redmi 1S, but with a Snapdragon 410 SoC. The new version though, updates the RAM and storage options in the device, making it an out and out favourite, considering the specifications. 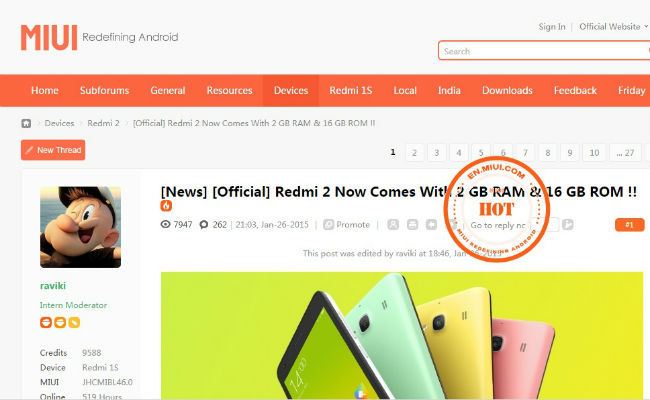 Also read: A look at Xiaomi's new phablets and other devices

Further, if the Redmi 2 is launched at the above mentioned price point in India, it is likely to become a one of a kind device, quite like the Xiaomi Mi3 was when it was first launched in the country. Currently, the best specifications that you can get in this price range come in the Lenovo A6000, which is to go on its first flash sale tomorrow. That device still has 1GB RAM and 8GB internal storage.

The full specs of the Xiaomi Redmi 2 are as follow,

The Redmi 2 update was first spotted on TENAA (the Chinese equivalent of the FCC) and has since also been confirmed by Xiaomi CEO Lei Jun on Weibo. It is also on the MiUI Forums now. The company is also finally about to launch the Xiaomi Mi4 smartphone in India tomorrow, along with MiUI 6.