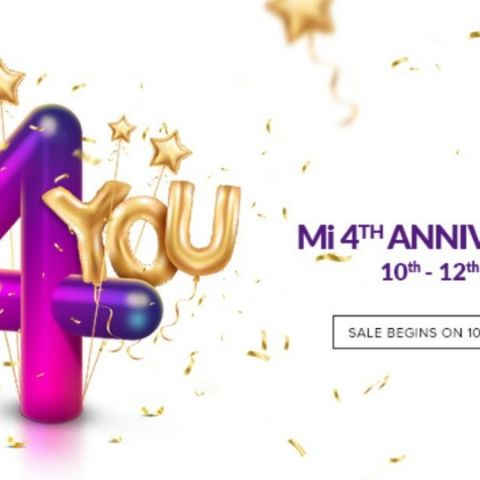 The Mi4You sale will have devices offered at just Rs 4, along with devices like Mi LED TV and Redmi Note 5 Pro available on all the three days. Other exciting offers include cashback and discounts on older products with heavy discounts on bundled deals.

It’s been four years since Xiaomi launched the Mi 3 in India back in 2014 and over time climbed to clinch the top position in the Indian smartphone market. Over the past four years, Xiaomi has shifted the consumer’s preference in favour of affordable, feature-packed value for money phones and has given established players like Samsung and Moto a run for their money. To celebrate its phenomenal growth in the country, Xiaomi has announced its Mi4You sale from July 10 where smartphones and accessories by the company will be sold at a discount.

The Mi4You sale will kick-off at 4PM on July 10 and will offer some incredible deals. The website for the sale states there will be “Rs 4 Flash Sale”, “Blink & Miss Deal”, “12PM Blockbusters”, “Mi Anniversary Specials” and “Grab Coupons”.

There is a hidden game as well called “Find the Hidden 4s” which takes you to a mobile-only game accessible only through the “Mi Store” app on iOS and Android. The winners can win a Mi Mix 2, Redmi Y2 and other goodies from Xiaomi.

The Rs 4 Flash Sale has grown to become one of the most exciting part of Xiaomi’s anniversary sale where previously the company gave away devices at as low as Re. 1. This year, the company says it will give away the Mi LED Smart TV 4 at Rs 4, down from its price tag of Rs 44,999.

The Mi Body Composition Scale for Rs 1,999 and the Redmi Note 4 5 Pro, Redmi Y1, Redmi Y2, along with the Mi Band 2 will all be given away at Rs 4. The flalsh sale will go live at 4PM every day on July 10, 11 and 12. There will, of course, be only a handful of units of the products and only the luckiest have a chance at snagging one of these for Rs 4.

The Blink and Miss Deals will go live at 6PM on all the three days offering bundled products under discount. The Mi Body Composition Scale and the Mi Band 2 will be offered at Rs 1,999, while the Redmi Note 5 and the Mi VR Play 2 will be bundled for Rs 9,999. Also, the Redmi Y2 and the Mi Bluetooth Headset will be given away for Rs 8,999.

Other deals include the Xiaomi Bluetooth Speaker and earphones, 10,000mAh Powerbank 2i along with Mi Rollerball Pen for Rs 899 and a lot more. Each bundle will have 200 units on sale. Only the Mi Air Purifier 2 and the filter will have 50 units for the sale.

As part of Mi Anniversary Special deals, Xiaomi will put on sale the Mi LED Smart TV 4 and the Redmi Note 5 Pro every day at 12PM. There is no word on whether these products will be offered at a discount. The devices are anyway quite hard to find available, so a three-day long flash sale can be considered a valid reason to buy them.

Users can also get coupons every day at 10AM which can be redeemed for an additional discount when purchasing products. There are other cashback offers and exchange options as well. The Mi Protect Program will be given at a discount of “up to Rs 300”  while cases and other protective accessories will be offered at Rs 29. SBI card holders can get a discount of Rs 500 for a minimum transaction of Rs 7,500, while Paytm users will get a cashback of Rs 500 for a minimum transaction of Rs 8,999 and 25 percent cash back for MobiKwik users.