Xiaomi Mi LED Smart TV 4 sold out within minutes, might still be available at Mi Homes 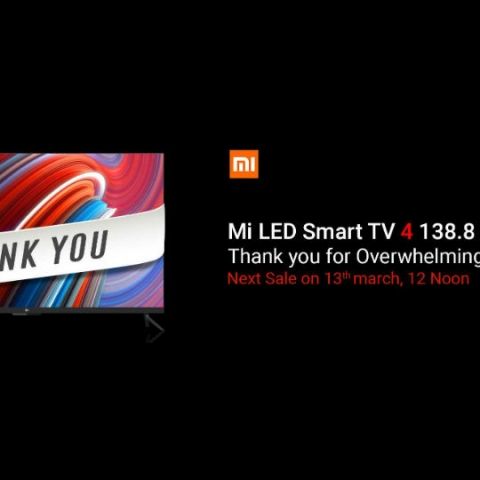 Xiaomi’s Mi Smart LED TV 4 was sold out on Flipkart and Mi.com mere minutes after going up on sale at 12PM today, or atleast that's what the websites said. Flipkart even put up a banner within moments of the sale starting, thanking those who managed to purchase the Mi Smart LED TV 4 and informing users that the next sale of the TV would be held on March 13, at 12PM. Those still interested in owning a Mi TV could also try their luck at one of Xiaomi’s Mi Home offline retail stores.

The Mi Smart LED TV 4 comes with PatchWall OS, which is a fork of Android. However, it does not support the Google Play Store. However, it does offer integration of the set-top-box (STB) content, allowing users to navigate through the content using the TV remote. There is also a universal search feature that allows users to search for content on the STB and streaming apps. You can check out our review of the Mi Smart LED TV 4 here.

The Mi TV was launched in India alongside the Redmi Note 5 and Redmi Note 5 Pro smartphones. The two smartphones will be up for flash sale tomorrow at 12PM. However, it is possible both these devices will also be sold out within a few minutes. During the first sale, the company claimed that it sold over three lakh smartphones within three minutes, while the Mi TV was sold out in 10 seconds.