Xiaomi is reportedly gearing up for providing Android Nougat to more devices. The upgrade list of sorts was confirmed by Xiaomi’s MiUI Operations Manager on Weibo, and includes Mi 4c, Mi 4s, Mi Note, Mi Note 2, Mi 5s Plus and Mi Max. Of the devices mentioned, only the Xiaomi Mi Max is officially sold in India, and as of now, it seems like Xiaomi’s other devices in India will have to wait longer for the latest of Android.

The company has not yet confirmed a target date for the upgrade to be rolled out, although according to the Weibo post, beta testing of Android Nougat on the concerned phones is under way. The upgrade is expected to arrive with Xiaomi’s new custom interface MiUI 9. Alongside the usual array of improvements that Android Nougat natively brings with itself, MiUI 9 will reportedly come with better notifications management, redesigned icons, new themes and more shortcuts for ease of usage. Xiaomi’s MiUI 8-based Android Marshmallow had brought a host of new features including in-call IVR and the ability to group messages and copy OTPs promptly. 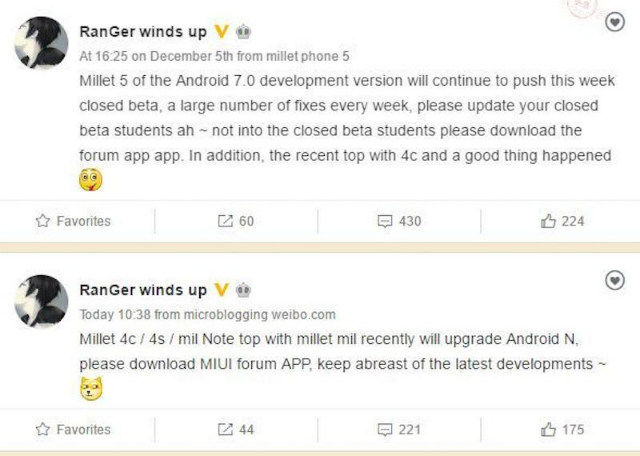 Interestingly, one of Xiaomi’s most popular smartphones in India, the Redmi Note 3, has only just received the upgrade to Android Marshmallow. The firmware upgrade was released in public Beta back in September, and is just rolling out to devices. While Xiaomi seems significantly behind other OEMs in the upgrade cycle, the push for Android Nougat in its newer devices will hopefully see more frequent upgrades in the future.

Despite no timeline being given, speculations point toward Android Nougat being pushed to these devices in around March 2017.