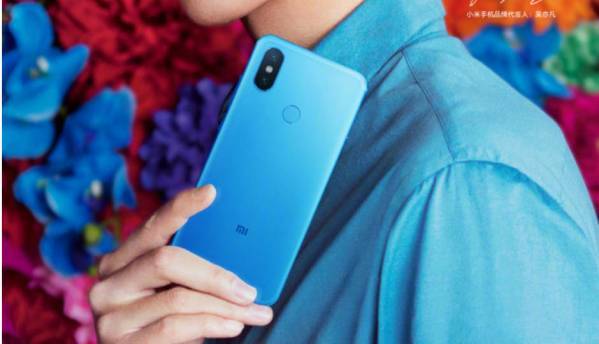 Alongside the 20MP dual-rear camera, the smartphone will also feature a 20MP front-facing sensor. Further, it is possible that Xiaomi could launch the Mi 6X globally as the Mi A2.

Xiaomi is all set to launch its Mi 6X smartphone in China on April 25. The company has already sent out invites for the event and now has teased the upcoming smartphone in a new Blue colour variant as well. Xiaomi posted an image of the device on Weibo, revealing the new colour variant and rear panel of the smartphone. Going by the image, the Mi 6X looks to be similar to the Redmi Note 5 Pro in terms of design. The device sports a vertically stacked dual-rear camera setup and the poster confirms that it will come with a 20MP sensor on both the front and rear cameras.

Xiaomi previously announced its Mi 5X smartphone globally as the Mi A1 and similarly, is expected to launch the Mi 6X globally as the Mi A2. The smartphone was previously spotted on TENNA and the listing suggests that it could be powered by an octa-core Snapdragon 626 SoC clocked at 2.2GHz and may feature a 5.99-inch full HD+ display. It could sport 4GB RAM with 64GB internal storage and might launch running on MIUI 9.5, which might be based on Android 8.1 Oreo. It could pack a 2910 mAh battery and the latest poster reveals that it will come with a rear placed fingerprint scanner. As mentioned above, the company has confirmed that it will come with a 20MP dual-rear camera, which are rumoured feature f/2.0 and f/1.8 aperture lenses. It will be equipped with a 20MP front-facing camera, probably with a f/2.0 aperture lens.

The launch of this phone comes just a few weeks after the company unveiled its new flagship smartphone, the Mi Mix 2S. The new phone comes with an edge-to-edge thin-bezel display and supports wireless charging as well. It sports a vertically stacked dual-camera setup and its rear panel is made of ceramic. On the front, it sports a 5MP camera, which is placed on the bottom right corner and on the back is a 12MP unit with a wide angle lens and another 12MP sensor with a telephoto lens. The rear camea sports a 1.4-micron pixel Sony IMX363 sensor and dual pixel autofocus (dual PADF) support.

The smartphone is powered by a 2.8GHz Qualcomm Snapdragon 845 platform with Adreno 630 GPU and features a 6-inch AMOLED display. It is backed by a 3400mAh battery and runs on MIUI 9, based on Android Oreo. The handset comes in three variants, two of the variants offer 6GB RAM and options of 64GB and 128GB ROM, which are priced at 3299 RMB (Rs 34,200 approx) and 3599 RMB (Rs 38,000 approx) respectively. An 8GB RAM variant of the smartphone will also be available with 256 internal storage priced at 3999 RMB (Rs 41,00 approx). The smartphone is yet to be announced in India.

The company also unveiled its XiaoAI smart assistant on the phone, which can be commanded for clicking photos, controlling other Mi devices and more. The Mi Mix 2S’s camera is also said to feature AI scene detection, instant currency and language translation, and more. You can read more about the smart assistant here.

The Mi Mix 2S supports 7.5W quick charging with the Qi wireless charging option, and the company claims that the phone takes just under three hours to fully charge wirelessly. The device is manufactured using series 7000 Aluminium and sports thinner bezels, compared to its predecessor. The company also emphasised some ‘powerful’ AI features of the new smartphone, which can shoot “Dynamic” Bokeh pictures, add an artificial background to an image and save it as a GIF or an image.