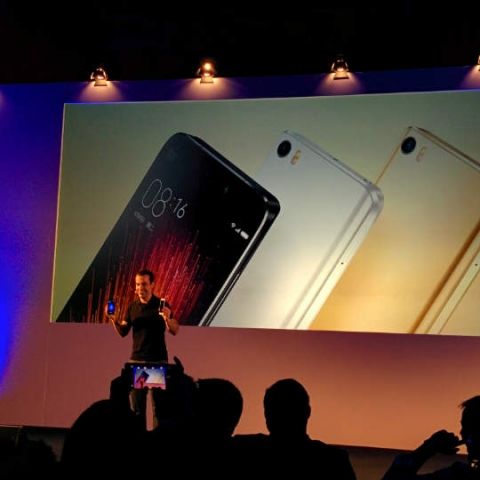 Xiaomi has announced the Mi 5 smartphone at MWC 2016. The phone has been rumoured for almost a year now, and brings almost the same specification sheet as was rumoured. The top variant of the Xiaomi Mi 5 (Xiaomi Mi 5 Pro) runs on Snapdragon 820, along with 4GB of RAM and 128GB of internal storage.

The Xiaomi Mi 5 also sports a 5.15-inch 16 LED light display with a 1080x1920-pixel resolution, with a 3D Glass back. It was rumoured that the phone will sport 4GB of RAM, but the two base models with 32GB and 64GB of on-board storage come with 3GB of RAM. Notably, only the highest variant of the device, the Mi 5 Pro features an LPDDR4 RAM. The Mi 5 uses a 16MP rear camera with dual-LED flash, 4-axis OIS, PDAF (Phase Detection autofocus) and DTI (pixel-to-pixel isolation) image enhancement. Xiaomi has used a Sony IMX298 sensor to power the rear camera. The front camera is a 4MP UltraPixel setup, with an f/2.0 lens. A 3000mAh battery with Qualcomm's Quick Charge 3.0 powers the device. The Xiaomi Mi 5 has a metal and glass build that is reminiscent of the Xiaomi Note Pro, which never made it to India. However, unlike the Note Pro, the new phone gets a fingerprint sensor placed below the display. Other features include VoLTE (Voice over LTE), IR Blaster, USB-C and NFC. The device comes in three colours - black, gold and white.