Xiaomi made its debut in India with the launch of Mi 3 in July 2014. The company claims to be selling an average of 22,000 smartphones every day for the past three years. 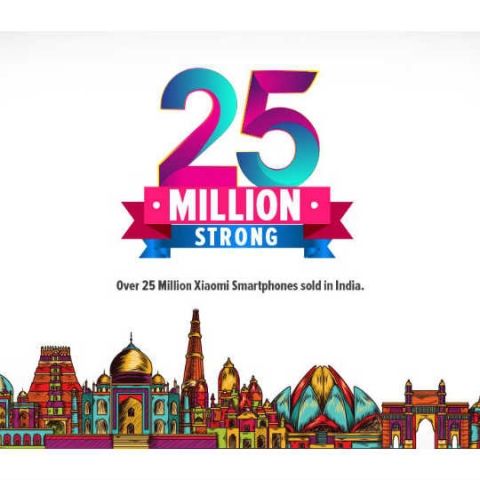 Xiaomi says it has sold over 25 million smartphones in India in three years. The company made its debut here about three years back with the launch of Mi 3 smartphone in July 2014. Xiaomi claims it is the fastest to cross the 25 million sales mark in India.

Xiaomi claims to have achieved the mark by selling an average of 22,000 smartphones every day for past three years. Xiaomi India VP and Managing Director, Manu Jain tweeted the announcement and is giving out company's bezel-less Mi Mix smartphone to a lucky winner. Xiaomi's last few launches have easily managed to hit 1 million sales mark. Jain believes the Redmi Note series has been the primary driver for this strong sales number. Xiaomi has sold over 5 million units of Redmi Note 4 smartphone launched exclusively on Flipkart in January. Counterpoint research says that Redmi Note 4 is the best selling smartphone in the online segment for the past two quarters.

Xiaomi had sold over 4 million units of its Redmi 3S series and its replacement Redmi 4 has also notched up sales in the tune of 1 million units. Xiaomi is currently the second largest smartphone brand in the country and according to Canalys, it shipped 4.8 million smartphones in the second quarter of 2017 alone. The company's shipments more than quadrupled in the last quarter and is slowly inching closer to Samsung's leadership position.

Xiaomi CEO Lei Jun recently remarked that his company saw 328 percent growth in its India revenue during the first six months of 2017. Xiaomi has seen tremendous success among smartphone buyers in the budget and mid-range price segment. The company is preparing to introduce a new smartphone series with dual camera setup on September 5. If past performance is any indicator, this device could be another smartphone to hit million sales mark within months of its launch.