The Xiaomi CEO also asked fans what they expect from the Mi Max 3, hinting that the launch of the device is imminent.

In May, Xiaomi founder and CEO Lei Jun confirmed on Weibo that the Xiaomi Mi Max 3 will be launching in July. Now, Jun has posted a message along with a photo of the box of the upcoming device on the Chinese social networking site asking people to tell him what they want from the smartphone. The development follows a story which claimed that the company is expected to launch a smartphone on July 3 and it was likely to be either Mi Max 3 or the Hatsune Edition of the Mi 6X smartphone. The Mi 6X Hatsune Edition has been already launched and there is no further information available on Mi Max 3. 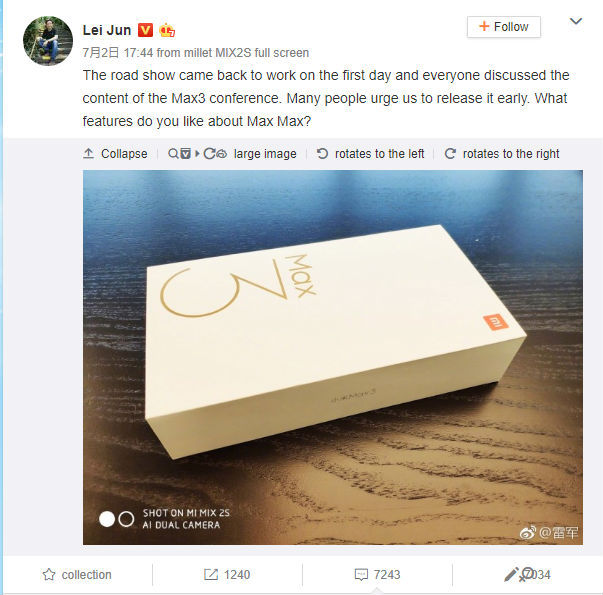 Mi Max 3 remains one of the most anticipated Xiaomi phones. Leaks and rumours have suggested that the device is expected to retain its giant-sized footprint. It will reportedly sport a 6.99-inch Full HD+ 18:9 display along with a gigantic 5,500mAh battery with Quick Charge 3.0 support. Furthermore, it is expected to support Qi-standard wireless charging along with an iris scanner for biometric authentication.

The successor to Mi Max 2 may also come with dual rear cameras, with either Sony IMX363 sensor or a S5K217+S5K5E8 Samsung ISOCELL module. On the front, the Mi Max 3 is expected to bear a Samsung sensor along with an OmniVision OV2281 iris scanner. Firmware files leaked before indicated the phone will run on Android 8.1 Oreo out of the box. Earlier, reports had indicated that the phone is also rumoured to bring 3D facial recognition and on-screen fingerprint authentication. Along with the Mi Max 3, the company may launch the successor to its fitness band, the Mi Band 3.