Xiaomi 5X specifications and price leak, could be the first smartphone under third sub-brand

Follow Us
HIGHLIGHTS
Xiaomi 5X specifications and price leak, could be the first smartphone under third sub-brand

The Xiaomi 5X could become the first smartphone to launch under the company's third sub-brand joining the Redmi and Mi series. The upcoming smartphone has been spotted in a poster image revealing its specifications and expected pricing. The handset looks like a mid-range smartphone aimed primarily at the offline segment.

The poster reveals that the Xiaomi 5X sports a 5.5-inch Full HD display and is powered by Qualcomm's Snapdragon 625 SoC. The device also sports a dual rear camera setup and is tipped to hit retail stores at a 1,999 Yuan (approximately Rs 20,000) price tag. GizmoChina adds that the smartphone features dual 12MP rear cameras and that the 5X branding indicates support for 5x optical zoom. 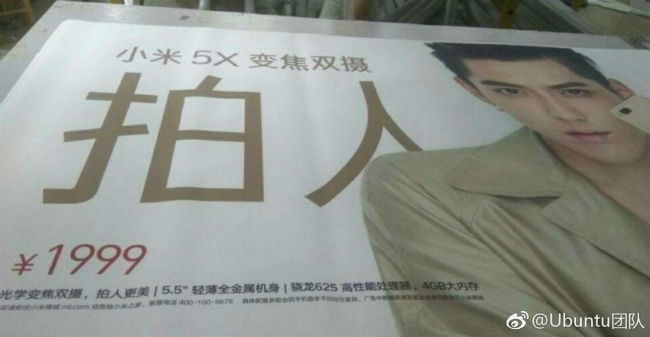 The smartphone shown in this poster looks identical to a leaked image showing the first device under the company's third sub-brand. Xiaomi, which has been an online-centric brand, is reportedly trying to compete with Oppo and Vivo in the offline segment with its new sub-brand. There are also reports that there will be a higher-end version powered by Snapdragon 660 chipset coupled with 6GB RAM. The device is said to sport a 16MP front camera and run Android 7.1.1 based MIUI 9.

Xiaomi recently confirmed that it shipped 23.16 million smartphones in the second quarter of 2017 and registered 70 percent quarter-on-quarter growth. The company CEO Lei Jun has set a target of 100 million shipments and 1,000 Mi Home stores for 2018. The Xiaomi 5X is rumoured to be made official on July 26.