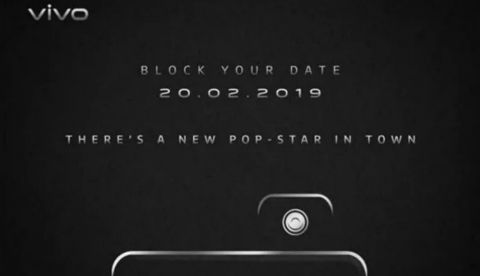 Vivo has announced that it will be launching the V15 Pro smartphone in India on February 20. The company has given a heads-up to the media asking them to block the date for an event on February. The message does not have any information regarding the venue of the launch but it surely implies that the Vivo 15 Pro will have a pop-up selfie camera mechanism that we have already seen in the Vivo Nex launched last year.

If we go by the announcement, we can see a difference between the placement of the pop-up camera. While the Vivo Nex had the mechanism towards the left edge of the display and the teaser of the Vivo V15 Pro suggests that the company has chosen to move the mechanism towards the edge on the right side. There is no information regarding the specs and other features, and it is likely to sport an edge-to-edge design like the Vivo Nex.

According to the information available on the internet, the Vivo V15 is said to have a 32MP selfie camera. Previously, a transparent case for the smartphone was leaked online hinting that the device will have a triple camera setup on the back. As per the rumours, the device is said to be the successor to the Vivo V11 Pro. The leaked case also showcases space for the 3.5mm endangered headphones jack.

It is possible that the V15 Pro will have the same in-display fingerprint sensor found on the V11 Pro. The hints to the this claim originated from the above-mentioned transparent case as it does not show a fingerprint sensor cutout. The V11 Pro is available for a price of Rs 25,990 and the the Vivo Nex costs nearly Rs 39,990. It could be possible that the cost of the Vivo V15 Pro could be somewhere between the price of these phones.

Recently, Vivo announced the Vivo Nex Dual Display phone (not available in India). It has a 6.39-inch FullHD+ Super AMOLED display with a 91.63 percent screen-to-body ratio at the front. The back has a 5.49-inch Full HD AMOLED display under a glass panel. The device is powered by a Snapdragon 845 coupled with 10GB of RAM and 128GB of storage. The photography responsibilities are on the 12MP Sony IMX 363 sensor with f/1.79 aperture and 4-axis OIS. It is accompanied by a 2MP night vision camera along with a 3D TOF sensor with f/1.3 aperture on the back.

Vivo has been doing well in India as it has taken a spot among the top five smartphone vendors in previous year. According to the latest data by Hong Kong-based market research firm Counterpoint Research, Vivo grabbed the third spot with 10 percent share in the Indian smartphone shipments in the whole 2018. In the fourth quarter of 2018, Vivo grabbed the third position in number of shipments with 9 percent market share.