Vivo is offering No Cost EMI and extra Rs 2000 off on exchange on both the V15 Pro with 8GB RAM variant and the V15 Aqua Blue colour model. 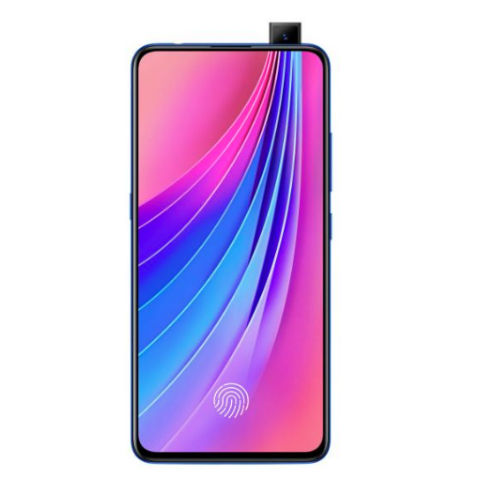 Expanding its smartphone portfolio in India, Vivo has launched two new variants of its V15 Series in India. The Vivo V15 Pro(₹ 23990 at flipkart) will now be available in an 8GB RAM variant, and the non-pro model can now be purchased in an Aqua Blue colour. Apart from the additional 2GB RAM, the Pro has the same internals. The Vivo V15 has Aqua Blue as the new third colour option to the previously launched Frozen Black and Glamour Red colours.

The company is offering same discounts on both the phones. Customer can get extra Rs 2000 if they exchange an old device. No Cost EMI is available on credit cards of selected banks and Bajaj Finserv. Jio users who purchase the phone can get benefits of up to Rs 10,000. This include Rs 6000 cashback which will be credited in the form of 40 vouchers of Rs 150 each. The remaining benefits will be delivered in the form of “Partner Coupons”.

The Vivo V15 Pro features a 6.32-inch display with a 19.5:9 display aspect ratio. The proximity and ambient light sensors are hidden behind the display and the phone is touted to feature a 91.64 screen to body ratio. The Vivo V15 Pro comes equipped with an in-display fingerprint sensor and the company claims that the sensor can unlock the device in 0.37 seconds. Under the hood, the phone has the Qualcomm Snapdragon 675 platform. It was initially launched in only 6GB RAM and 128GB of internal storage version. 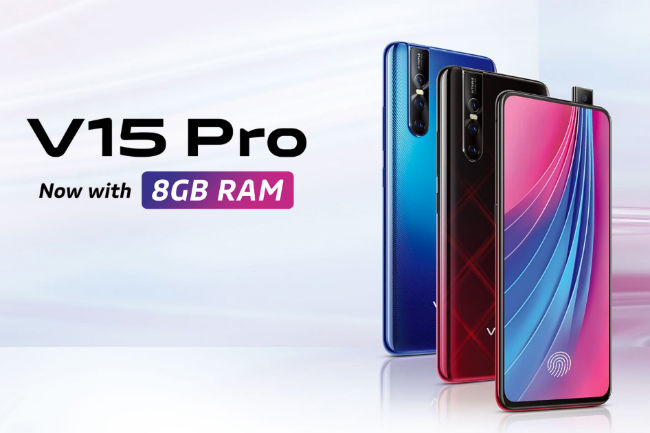 In the camera department, the phone comes equipped with a triple camera setup with a 48MP primary sensor, an 8MP super wide-angle camera, and a 5MP sensor that enables bokeh shots. On the front is a 32MP camera which is housed in the pop-up module. The phone is backed by a 3700mAh battery and supports ‘dual-engine’ fast charging. There is also a dual turbo mode for gaming, which is said to reduce apps’ boot time by 20 percent. The Vivo V15 Pro 6GB RAM and 128GB storage version is priced at Rs 28,990, and the latest 8GB RAM and 128GB variant can be purchased for Rs 29,990 in Topaz Blue and Ruby Red colours. 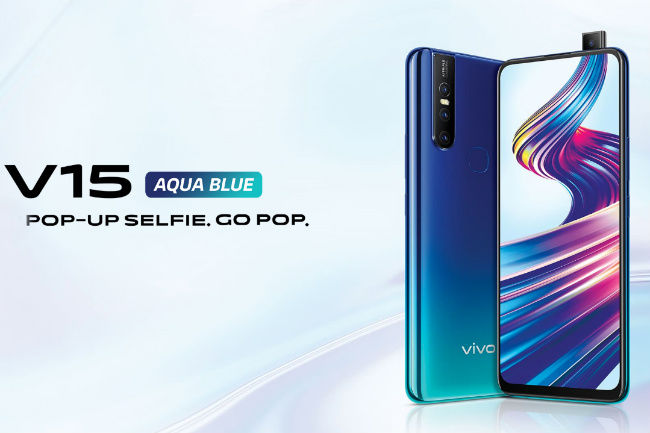 The Vivo V15 sports a 6.53-inch FHD+ FullView display with a 90.95 percent screen-to-body ratio. Under the hood, it has a MediaTek Helio P70 SoC with 6GB of RAM. The device offers 64GB of inbuilt storage and packs a 4,000mAh battery with the company’s Dual-Engine fast charging system. It also comes with Funtouch OS 9, which is based on Android 9.0 Pie. When it comes to camera, the Vivo V15 is equipped with a triple camera setup with a 12MP Dual Pixel Sensor, combined with an 8MP Super Wide Angle Camera and a 5MP Depth Camera. The 8MP Super Wide Angle Camera offers a 120-degree field of view. Just like the Pro variant, the standard variant also has a 32MP pop-up front-facing camera. The Vivo V15 can be purchased for Rs 21,990.