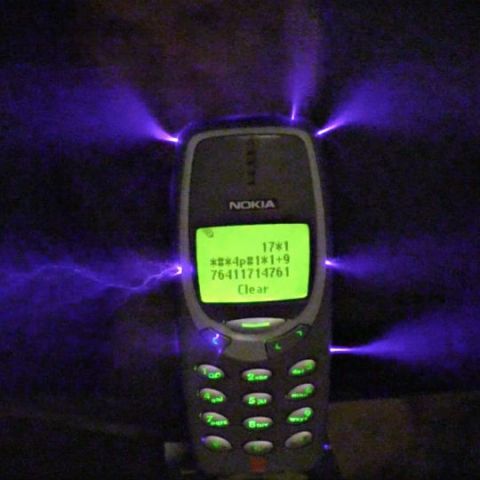 When a Nokia 3310 and a modern day smartphone get zapped by a million volts of electricity many interesting things happen, but apparently only one survives

A recent video uploaded to YouTube channel Kreosan pitted a Nokia 3310 against a modern-day smartphone. This wasn’t a run of the mill performance test, but more like a test of endurance. Both the phones were plugged into a home-made contraption that pushed a million volts into the phones. The idea was to perhaps see what would happen, and the results were indeed surprising.

In the video, the Nokia 3310 (not the modern 4G reincarnation) is the first to receive a jolt of a million volts. The phone is plugged into a device that generates a million volts and the voltage is cranked up slowly. Initially, we see the Nokia 3310 register key presses. As the voltage is cranked up even further, streaks of blue light start to leak through crevasse on the 3310. The plastic build of the Nokia 3310 doesn’t have enough resistance for the voltage, and the electricity starts to arc through, hitting other metallic objects in closest vicinity. This is seen when we get a second angle on this experiment, where a metallic smartphone was being used to film, often catching arcs of electricity. During the voltage assault, the Nokia 3310 even receives a phone call, before finally shutting down, potentially due to voltage overload. In a surprising turn of events, the Nokia 3310 did eventually turn on and seemed to be working just fine.

The modern-day smartphone, on the other hand, wasn’t so lucky. After a few minutes of taking a million volts, everything on the phone went haywire. Just like the Nokia 3310, it was registering ghost-input, with apps opening and closing, letters being pressed. Eventually, the camera app opens and closes, but a part of the screen is seen to retain the image from what the camera was seeing. Finally, the experiment is turned off because the smartphone display had stopped responding. Upon opening the smartphone, it turned out that one of the controllers on the motherboard had taken a brunt of the voltage and was fried, rendering the display unusable.

While the video is in no way scientific, it does go on to show that the old-school mobile phone was far more resistant to damage than a modern-day smartphone when it came to being assaulted by a million volts. The smartphone does have a lot many more components in comparison to an old-school mobile phone, making it more resilient to damage. However, it should be said that the smartphone wasn’t completely “fried,” and that it could be repaired back into working condition. The Nokia 3310 may have survived without any obvious, visible damage, but the video doesn’t show the phone being opened up for inspection.  Regardless, it did make for an interesting video and possibly serves as a case for bringing back the old-school mobile phone.