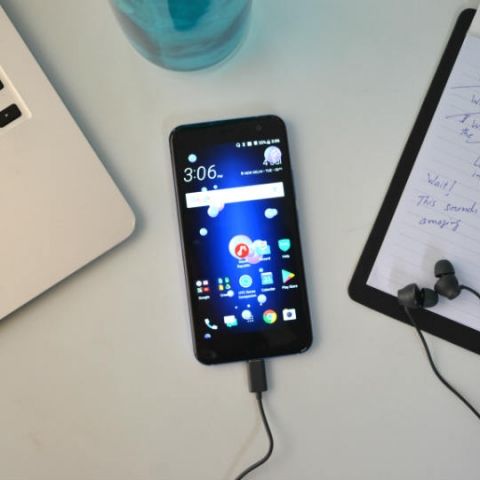 A Twitter user and leakster LlabTooFeR has reported that HTC is currently working on an HTC Ocean Life smartphone which will be released with Android One. As is expected with devices running on stock Android, the HTC U11 Life could be free from most of the pre-installed HTC apps and run on stock Android O with Sense 9.0_A1. According to the tweet, this could result in the phone coming with minimum modifications and be left with only Edge Sense, Zoe and the HTC camera.

HTC Ocean_Life will be released under Android One program. It will lose most of the HTC apps and run stock Android O with Sense 9.0_A1.

Another leakster, Evan Blass replied to the original tweet confirming the report and added an image of the alleged U11 Life. He later said that the image attached is of a normal version of the HTC U11 Life and not of the Android One version. The attached image shows the front of a device that looks a lot like the U11, albeit with much thicker bezels. The image of the HTC U11 Life shows a rather simple design with the volume and power buttons on the side and a fingerprint sensor just below the screen.

The HTC Ocean Life is rumoured to feature a 5.2-inch full HD display. It is expected to be powered by a Qualcomm Snapdragon 630 SoC. The amount of RAM in the device is unknown, however it is tipped to come with 32GB of internal storage. The smartphone is also rumoured to feature a 16MP rear camera  along with a 16MP front camera. The HTC U11 Life may be targeted at the mid-range device segment, unlike HTC’s latest flagship, the HTC U11.

HTC’s flagship smartphone, the U11 was launched in India in June at a price of Rs 51,990. The smartphone sports a 5.5-inch QHD display and is powered by Qualcomm’s Snapdragon 835 SoC. The U11 features a 12MP rear camera with Optical Image Stabilisation (OIS) and a f/1.7 aperture lens. At the front, the device sports a 16MP camera. The phone comes with the company’s Edge Sense technology in which sensors are embedded into the frame. The sensors detect when users squeeze the phone, and this can be used to quickly access apps. The phone also comes with the company’s own AI-based assistant called the Sense Companion.