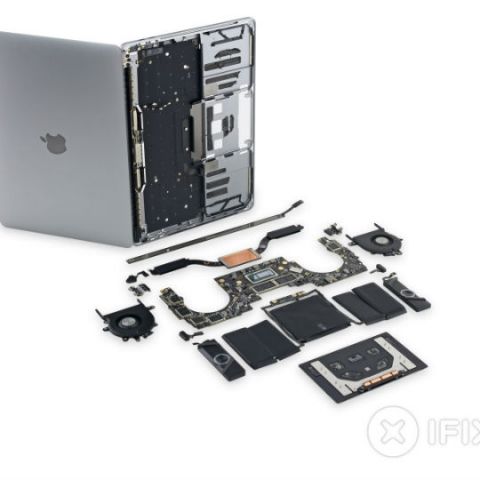 The teardown experts over at iFixit have got their hands on the new 13-inch Macbook Pro with the OLED Touch Bar, and the results are not very good. The new MacBook got a repairability score of just one out of a possible ten, which means that the device is extremely hard to repair if damaged.

iFixit notes that the addition of the Touch Bar means that there is another screen that can be damaged. In fact, during the teardown, iFixit accidently damaged the Touch Bar and the digitizer separated from the display. Another thing noted during the tear down was that the flash storage was soldered on the logic board alongside the RAM and processor. This means replacing or upgrading the storage is no longer an option. This matches an earlier report by MacRumors, in which one of the readers had opened their 15-inch MacBook Pro and found a similar setup.

Further, the new Touch ID sensor doubles as a power switch and is paired with the T1 chip on the on the logic board. So broken power switch will require assistance from Apple, or a whole new logic board. The battery assembly is also glued on the case, which complicates the removal process. The only good thing that iFixit had to say about the new MacBook Pro is that the trackpad can be removed without first removing the battery.

The 13-inch MacBook Pro with function keys doesn’t fare much better as it got a score of two. Thankfully, Apple’s other devices, the new iPhone 7 and 7 Plus fared much better. The two smartphones got a repairability score of seven out of ten.