How do the specs of the new Galaxy S10+ compare with those of the iPhone XS Max? Read on to find out. 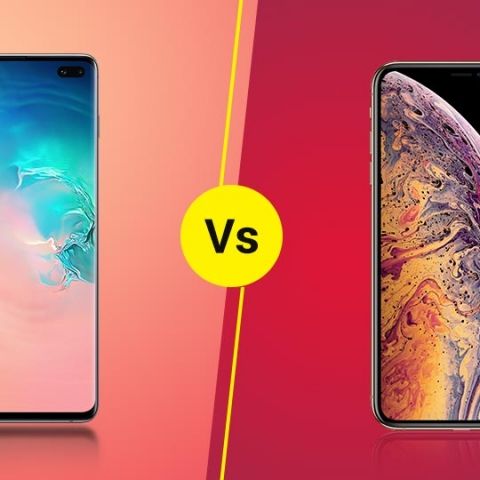 Only yesterday, Samsung announced its latest range of flagship smartphones at its Galaxy UNPACKED event in San Francisco. The Korean electronics manufacturer announced a total of four new devices with one being the long-expected foldable smartphone, the Galaxy Fold. The other three belong to the Galaxy S10 range: the S10, S10+, and S10e. Today though, let’s compare the specs of the Galaxy S10+ with those of its biggest competitor, the Apple iPhone XS Max. Do note that this comparison is made solely based on the specs of the two models and that only a definite review of the Galaxy S10+ will let us carry out a full-blown comparo.

What underpins the Samsung Galaxy S10+ depends on the region in which it’s being sold. However, the spec sheet shared at the time of the launch of the device states that the Galaxy S10+ comes with a 7-nanometre 64-bit Exynos 9820 chipset. The chipset on the Galaxy S10+ is the same as the one on the Galaxy S10. The fastest core on the Exynos clocks in at 2.8GHz. The iPhone XS Max, on the other hand, comes with Apple’s proprietary A12 Bionic chip.

In our review, the iPhone XS Max scored scored 4692 and 10997 in Geekbench 4’s Single and Multi-Core benchmarks respectively. Though we have no first-hand figures of the Galaxy S10+’s performance, we’re confident it’ll score upwards of 10,000 in the same Geekbench 4 Multi-Core test. Still, we can confirm such figures only when we get our hands on the new Samsung flagship.

The Samsung Galaxy S10+ comes with massive LPDDR4X RAM options: 8GB and 12GB. Storage onboard goes all the way up to 1TB, while expanded storage using a microSD card goes up to 512GB, giving the user a total of 1.5TB of storage for their media. Though Apple doesn’t publish how much RAM their iPhones come with, we believe the iPhone XS Max has 4GB of RAM. Storage onboard is limited to 512GB internally and there’s no option to expand it.

The Samsung Galaxy S10+ comes with a considerably large 4,100mAh battery, while the Apple iPhone XS Max comes with a relatively smaller 3,174mAh battery. It’s hard to say whether the Galaxy S10+ will outlast the Apple iPhone XS Max in terms of battery life but we’ll get a better idea once we have the device in our hands. On the bright side, both phones have Qi-certified wireless charging. That said, the Galaxy S10+ can charge another device wirelessly while it’s being charged using cable using its PowerShare technology.