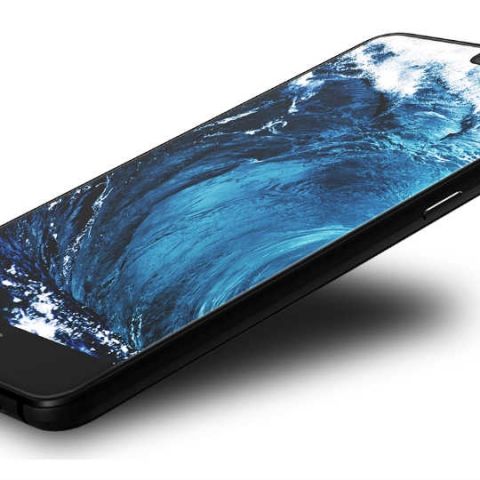 Sharp Aquos S2, the smartphone with an edge to edge display is now official. The Aquos S2 resembles the design first seen on Andy Rubin's Essential Phone with the same front camera notch at the top but it has a slightly smaller display. It might come as a surprise that Sharp has already built 28 full screen smartphones in the past and this is the company's 29th release.

In terms of specifications, the handset sports a 5.5-inch full screen display with a resolution of 2040 x 1080 pixels. The Aquos S2 has a screen-to-body ratio of 87.5 percent based on Sharp's Free Form Display technology. The edges at the top of the display have been weirdly curved but Sharp is boasting of the 135 percent sRGB gamut support.

The standard edition of Sharp Aquos S2 comes with 4GB RAM and 64GB storage and uses the Snapdragon 630 chipset. There is also a variant powered by the faster Snapdragon 660 processor coupled with 6GB RAM and 128GB storage. Both the variants also support expandable storage up to 128GB via a microSD card slot.

The Sharp Aquos S2 is backed by a 3020mAh battery and supports fast charging via USB Type-C port. The smartphone runs Android 7.1.1 Nougat with Sharp's Smile UX and is priced at 2,499 Yuan (approximately Rs 25,000) for the base model and 3,499 (approximately Rs 35,000) for the 6GB RAM variant. The smartphone will go on sale starting August 14 in China and might be extended to other markets as well.