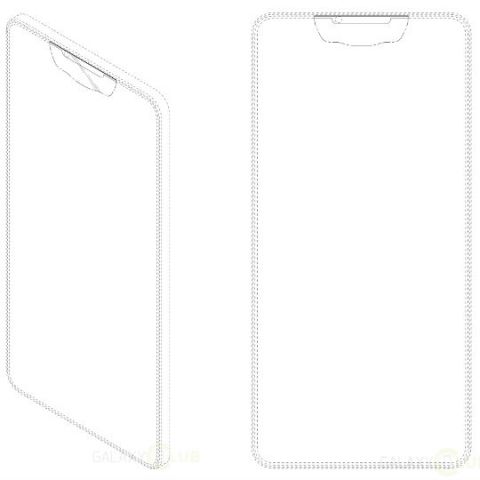 Samsung has received a patent for a smartphone design with an edge-to-edge display and a notch at the top to house the front camera and other sensors. Sounds familiar, because this is purported to be the design language for Apple's upcoming OLED iPhone and also seen on Andy Rubin's Essential Phone.

The patent application was filed by the South Korean smartphone maker in May 2016 outlining the design direction for its future smartphones. According to the patent application spotted by GalaxyClub.nl on Korea's Intellectual Property Rights Information Service (KIPRIS), Samsung is looking at a design with the display extending to all four corner and a notch at the top housing the front camera and other sensors. Samsung has already announced the Galaxy S8, Galaxy S8+ and Note 8 with thinner bezels, but its next flagship could potentially do away with bezels altogether.

The patent application, however, does not reveal when Samsung plans to turn this design into a final consumer product. Samsung is expected to announce the launch of Galaxy S9 next year but details about the product are scant at the moment. While the patent does seem exciting from a smartphone design point of view, it does not guarantee that Samsung will turn this into a working design. Samsung and other tech companies have filed multiple patents in the past which never formulated into a final product.

We have already seen the launch of a nearly bezel-less design on the Essential Phone and the LG V30. Huawei is expected to join the trend with the launch of the Mate 10 while Xiaomi is expected to announce the Mi Mix 2 on September 11 with relatively thin bezels. With major smartphone makers shrinking bezels on their devices, it will be interesting to see whether the Galaxy S9 will adopt this design with no bezels at all.