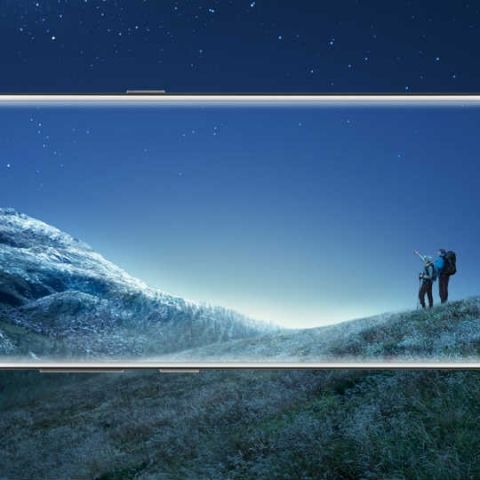 Samsung Galaxy S8 and S8+, the latest flagship smartphones by the company, have broken preorder records in South Korea. The new devices have received preorders of around 5,50,000 units in just two days. Samsung's previous flagships, Galaxy S7 and Galaxy Note 7's preorders were reportedly in the range of 1,00,000 and 2,00,000 units. This means that peorders for the Samsung Galaxy S8 are more than five times that of the Galaxy S7.

Samsung Galaxy S8 and S8+ were officially introduced on March 29 and are available for preorder till April 17. According to Hankyung, Samsung has set up over 3,000 stores across South Korea to sell the Galaxy S8. The company is reportedly offering a free Bluetooth speaker or a gift card worth 400,000 Korean Won (approx. Rs 22,500). Samsung Galaxy S8 and S8+ will reach consumers on April 21.

According to South Korean media, Samsung Galaxy S8+ with 6GB RAM and 128GB storage is enjoying higher demand than other models. Samsung sold 49 million units of Galaxy S7 last year and with Galaxy S8, the South Korean smartphone maker plans to break that record. Most analysts expect Samsung to ship 13 million handsets to consumers in the first month alone.

To recall, Samsung Galaxy S8 and S8+ feature 5.8-inch and 6.2-inch Super AMOLED Infinity display with bezelless design. The displays are curved at both the edges and sport resolution of 2960 x 1440 pixels with an aspect ratio of 18.5:9. DisplayMate has already crowned the Galaxy S8 and S8+ to have the best smartphone displays. The smartphones are powered by either the Snapdragon 835 or Exynos 8895 chipset and comes with 4GB RAM and 64GB storage. The 6GB RAM/ 128GB storage models are exclusive for Chinese and Korean markets.

Samsung Galaxy S8 and S8+ feature a 12MP rear camera and an 8MP front camera. The smartphone features an iris scanner, facial recognition and rear mounted fingerprint sensor. The Galaxy S8 is backed by a 3000mAh battery, while S8+ houses a 3500mAh battery. Samsung has announced Q1 guidance, which hints at record profits ahead of Galaxy S8's availability. With Galaxy S8 and S8+ preorders breaking records, the company could announce a new record with its Q2 results.