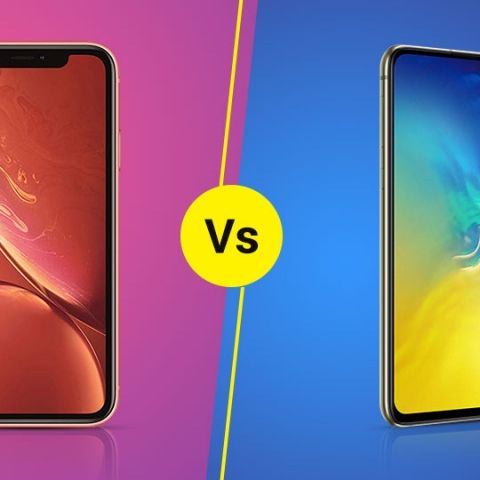 Samsung announced the Galaxy S10e around the same price range and in multiple colours to take on the iPhone XR. Here's how the two compete. 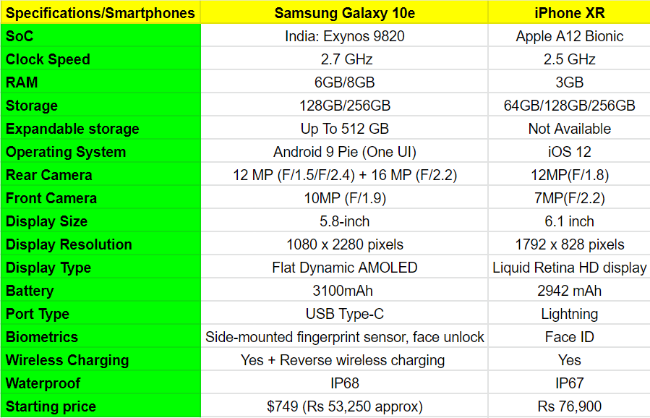 Let’s start off by taking a look at the display and design of the two phones. The newly announced Samsung Galaxy S10e sports an Infinity-O display design that gets rid of a notch by introducing a punch-hole in the display where the front camera is placed. However, it gets a flat display, instead of the flowing Infinity display we have come to expect from a Galaxy S series handset. On the other hand, the iPhone XR’s design is similar to the iPhone X/XS as the notch that houses the Face ID tech is quite prominent on the display. Those who dislike notches might like the Infinity-O display design appealing on the Galaxy S10e.

On paper, the display specifications of the Samsung Galaxy S10e do seem to fare better. It sports a 5.8-inch Dynamic AMOLED display with a 1080 x 2280 pixel resolution. On the other hand, the iPhone XR comes equipped with a 6.1-inch Liquid Retina HD LCD display with a resolution of 1792 x 828 pixels. As we mentioned in our review, the iPhone XR’s display let us down since the company preferred to increase the display size and decreased the resolution. Additionally, the fact that it costs more than the iPhone 8 Plus at launch and doesn’t feature a Full HD display is irksome.

iPhones are known for delivering great performance and the same was iterated when we tested the iPhone XR during our review. The smartphone comes equipped with the company’s own A12 Bionic chip that is made using a 7nm fabrication process and managed to best all Android flagships that we tested it against and matched the performance its older siblings, the iPhone XS and iPhone XS Max. This held true when we benchmarked the device on both Antutu and Geekbench.

While we are yet to review the Samsung Galaxy S10e, the leaked Geekbench scores of the phone did touch the 10,000 mark. In India, the handset will be launched running on the company’s Exynos 9820 SoC, which is manufactured using an 8nm fabrication process. While the chipset is at a slight disadvantage here by 1nm against its competitor, another leaked benchmark listing from Antutu suggests that the company could have tweaked the chip to churn out performance that is on a similar level as the A12 Bionic. However, we will reserve our judgements as we are yet to test the S10 with an Exynos 9820 SoC.

The iPhone XR is equipped with a single camera, while the Samsung Galaxy S10e gets dual main shooters. The iPhone XR features a 12MP wide-angle rear camera with F/1.8 aperture and on the front, it sports a 7MP sensor with F/2.2. As we said in our review, “The iPhone XR does take marvellous images, but the lack of a secondary camera is definitely going to pinch, especially given that the XR is priced the same as last year’s iPhone 8 Plus. If you must have a secondary lens, then you have no choice but to go for the more expensive iPhone XS.”

The Samsung Galaxy S10e sports a 12 MP main wide angle camera on the back that has a variable aperture between F/1.5 and /F/2.4. On the front it comes equipped with a 16 MP ultra wide shooter with F/2.2 aperture. The camera specs do look solid on the device and camera samples shown off by Samsung during the launch looked spectacular, however, we will give a verdict on how they fare when we put the handset through our camera tests.

We think that the comparison of memory between the Samsung Galaxy S10e and the iPhone XR will be a comparison between Apples (no pun intended) and Oranges. This is because the iOS on the iPhone XR is tuned to such an extent that it performs flawlessly in almost all tasks, even though the phone is equipped with 3GB RAM. We know that Android phones tend to slow down over time but the Galaxy S10e comes in 6GB and 8GB RAM variants. This amount of memory should suffice for most intensive tasks. However, we will refrain from delivering any verdict based on memory until we get to review the new Samsung phone. The iPhone XR runs on iOS 12 while the Galaxy S10e runs on One UI, which is based on Android 9 Pie.

In terms of storage, the Samsung Galaxy S10e takes the cake since its base variant gets 128GB of internal storage, with a higher memory option of 256GB. On the other hand, the base storage on the iPhone XR is 64GB, with higher options of 128GB and 256GB. More internal storage is always better and in this case, when you go for the base version, you get more internal storage with the Galaxy S10e and lest we forget, the phone also supports storage expansion up to 512GB via microSD card.

The Samsung Galaxy S10e comes in only a 128GB variant in India and is priced at Rs 55,900. Apple is selling the base version of the iPhone XR for Rs 76,900. Pre-bookings for the new Galaxy S10e have commenced in India and you can learn more about how to pre-book the handset and avail the offers here.