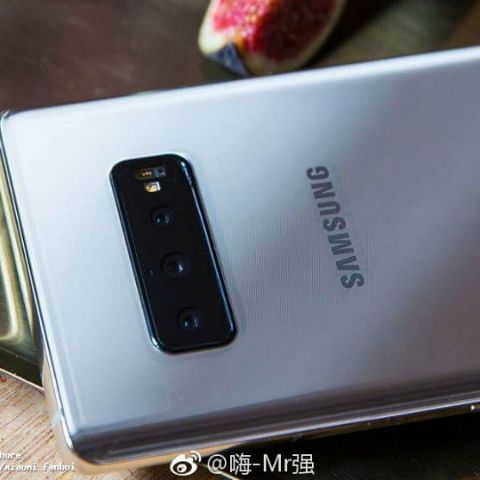 Alleged Live images of the Samsung Galaxy S10 are making the rounds on the internet, showing a three camera setup on the back panel of the phone. The images have been leaked by Slashleaks claiming that they are the “Real Life Images” of the smartphone. The device seen in the image above is one of the two leaked images of the Galaxy S10 and you can spot the Samsung branding below the camera setup on it. Also, there is no fingerprint sensor on the back hinting that reports of an in-display fingerprint sensor in the flagship device could be true. A button can be spotted on the right edge and the display is seen curving on the sides. The design is similar to what previous leaks have suggested, but until their is some solid proof, we have to take these leaks with a pinch of salt.

The alleged real life images of the Galaxy S10 have emerged just a few days after a fake Galaxy S10 image stirred the internet. Slashleaks first posted the image on Twitter but another user Bogdan Popa, Tech Editor and Reviewer at Softpedia in Romania, posted an image in reply saying that the image was fake and someone had actually done a great job in photoshopping it to make it look like the photo of an original Samsung Galaxy S10 smartphone.

Recently, a video leaked by Slashleaks, showed a person mishandling a device that has three rear cameras and Samsung branding on the back. When seen from the front, the smartphone had thick bezels on the top and bottom of the display -- something that does not match the rumoured description of the device. The corners of the device are rounder and the box contains a pair of old fashioned White coloured earphones with a 3.5mm jack, which are not likely to be seen on the upcoming 2019 flagship as Samsung ships AKG earphones with the flagship phones.