Samsung Galaxy Note 8 launch today: Specifications, Price, Live stream and everything else you need to know 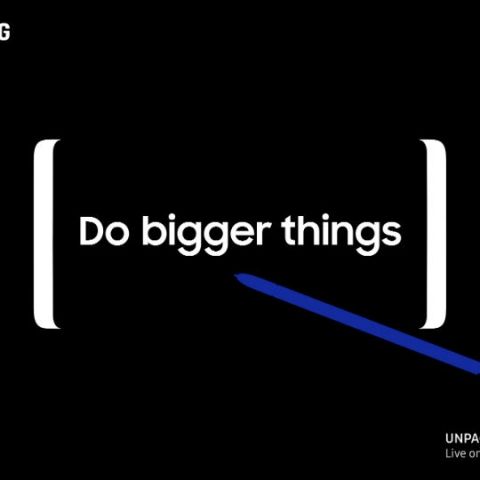 Samsung will announce its flagship smartphone for the second-half of 2017, the Galaxy Note 8, at an event in New York today. The Note 8 will be unwrapped at the company's Unpacked event scheduled to start at 8.30PM IST. The South Korean company will live stream the launch event on its website, Facebook account and Unpacked 2017 app for Android and iOS. Samsung India has also confirmed the availability of the live stream via 'Samsung Newsroom India' page as well.

The Note 8 can easily stake the claim for being one of the most anticipated smartphones of 2017, especially after last year's Note 7 debacle. The rumour mill has been working overtime to reveal every possible information about the handset including price, specifications and availability of the handset. The Galaxy Note 8 comes as a direct replacement to the company's ill-fated Galaxy Note 7, which the company had to recall due to a faulty battery design.

Design and Display: The Galaxy Note 8 is expected to follow the Infinity Display design language first seen on the Galaxy S8 and Galaxy S8+ released earlier this year. The handset is said to sport a larger 6.3-inch Quad HD+ Super AMOLED display with dual curved edges and a taller aspect ratio of 18.5:9. The Note 8 will also feature a metal and glass design, which has become a trademark feature on Samsung's flagship smartphones since the launch of Galaxy S6 in 2015. In terms of dimensions, the Galaxy Note 8 is said to measure 162.5mm x 74.6mm x 8.5mm, making it slightly thicker than the S8 series.

Specifications: The Galaxy Note 8 will be powered by Qualcomm's Snapdragon 835 mobile platform in the US, while other markets are expected to get Exynos 8895-powered variant. The Note 8 will be the first Galaxy flagship to launch with 6GB RAM as standard and there are also reports of the handset being offered in 256GB storage option. The base model is expected to offer 64GB internal storage and support expandable storage up to 256GB via a microSD card slot. The Galaxy Note 8 is expected to offer an improved iris scanning feature, but the fingerprint sensor will continue to be placed at the back, which we found to be hard to reach during our Galaxy S8 review.

Camera: The Samsung Galaxy Note 8 will also adopt the dual camera design seen on flagships from Apple, LG, Huawei, Motorola and HMD Global's Nokia. The Galaxy Note 8 will use dual 12MP rear cameras with Samsung's own ISOCELL sensors. The setup is expected to feature one wide-angle sensor and another telephoto lens capable of up to 2x optical zoom. Interestingly, both the sensors may support optical image stabilisation for better low-light images. The Note 8 is also expected to get the 8MP autofocus selfie camera found on the Galaxy S8 duo.

S Pen, Bixby and Software: With the Galaxy Note 8 mirroring the S8+ in terms of display size and design, the handset's biggest differentiator will continue to be the mighty S Pen. With Note 8, the S Pen is expected to get improvements in terms of pressure sensitivity and lower latency. The S Pen could also get new features along with translation support introduced with the Note 7 last year. Samsung released Bixby Voice support for nearly 200 markets including India yesterday and at the Note 8 event, the company is expected to announce new features coming to the digital assistant. Bixby will also have a dedicated button on the Note 8 and the smartphone will run TouchWiz UI based on Android 7.1.1 Nougat. Now that Android 8.0 Oreo is official, we hope Samsung will detail its roadmap for Android 8.0 update for its flagship.

Battery, Price and Availability: With the Note 8's battery, Samsung seems to be taking a conventional approach by packing a smaller 3300mAh battery as opposed to 3500mAh battery found on the S8+. The handset is expected to hit retail stores at nearly €999 (around Rs 75,000) price tag for the base model. Evan Blass has already revealed that the Note 8 pre-orders will begin from August 24 in the US and will go on sale starting September 15. Samsung is planning to offer a 256GB SD and wireless charger or Gear 360 camera to those pre-ordering the handset.

Competition: The handset is being launched weeks ahead of the official launch of LG's V30 and Apple's OLED iPhone in order to capitalise on the demand for premium smartphones. Samsung has already managed to recapture the lost market share with the Galaxy S8 and S8+ and will try to further cement its position with the Note 8. However, the biggest task in hand for Samsung will be to win the lost confidence among Note fans.