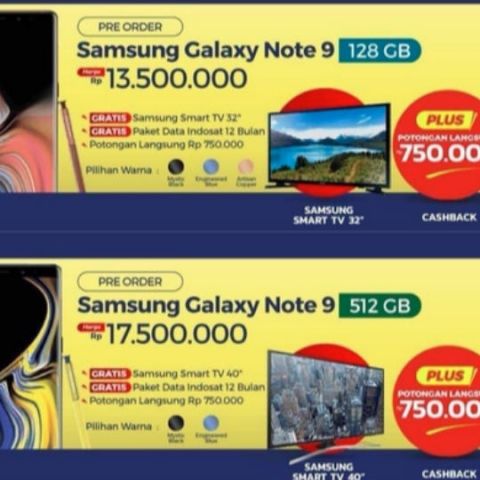 Adding to the long list of reports regarding the Samsung Galaxy Note 9, a latest poster leak by SlashLeaks has now surfaced showing the Indonesian pre-order prices of the different variants of the upcoming Samsung flagship. The poster suggests that Samsung will launch two variants, 128GB and 512GB, of the Note 9. The poster somewhat confirms an earlier report which claimed that Samsung will launch a 128GB base model of the device. There is no information about the RAM of the respective Note 9 variants mentioned on the poster.

According to the leaked poster, customers in Indonesia may pre-order a Galaxy Note 9 128GB variant for 13,500,000 Indonesian Rupiahs, which is approximately Rs 64,500. The 512GB variant is seen with a price tag of 17,500,000 Indonesian Rupiahs (approx Rs 83,500). Interestingly, buyers might also get a 32-inch or 40-inch Samsung Smart TV free with the phone depending upon the model they pre-order. There are cashback offers and mobile data plans bundled with the Note 9, as per the leaked poster. Moreover, the poster also mentions the colours of the devices: mystic black, engineered blue and artisan copper.

No further information is provided in the poster but several reports have already given us an idea about the features and specifications that the phablet could have. According to reports, the phone is expected to be unveiled on August 9. It is expected to feature a dual-rear camera setup, just like its predecessor. The change will be the fingerprint sensor on the back which is said to be placed below the camera module. The phone is said to feature two 12MP sensors with Optical image Stabilisation (OIS). At the front, the device is expected to offer an 8MP camera.

The biggest change is supposed to come with the S-Pen stylus which is tipped to offer Bluetooth connectivity to control music and group photos. The device is expected to feature a 6.3-inch QHD+ Super AMOLED display and it could to be powered by Qualcomm Snapdragon 845 (in the US). In other countries, Samsung is expected to incorporate an Exynos 9810 chipset. The Samsung Galaxy Note 9 is also said to be the first Android phone to offer the popular game, Fortnite Battle Royale at launch.