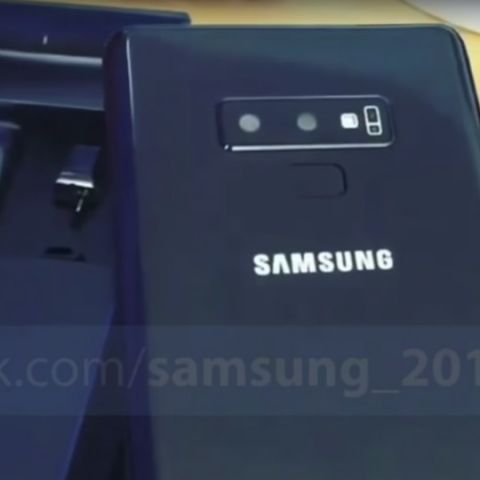 While the official unveiling of the Samsung Galaxy Note 9 may still be a few weeks away, we might have gotten an early look at the upcoming device. First spotted by MySmartPrice, an unknown user has posted an unboxing of the smartphone. Judging by the box, the phone is tipped to feature a 6.3-inch QHD+ Super AMOLED display. At the back of the device is a dual-rear camera setup with two 12MP sensors, both of which feature OIS. At the front of the device is an 8MP camera. This particular variant of the device is tipped to offer 6GB RAM with 64GB storage. Previous reports suggest that the device may offer upto 8GB RAM.

The video also shows the Galaxy Note 9. The phone looks a lot like its predecessor, the Galaxy Note 8 from the front. However, Samsung seems to have redesigned the rear panel. The fingerprint sensor is low located below the horizontally stacked dual-camera module.

As for the contents of the box, the device is tipped to come with a charger, a charging cable as well as what appears to a microUSB to USB Type-C converter. The box also seems to contain a pair of AKG tuned headphones.

To recall, the Samsung Galaxy Note 9 is expected to be unveiled on August 9. The phone is expected to offer an improved S-Pen that would feature Bluetooth capabilities. The phone will most likely be powered by the company’s flagship, Exynos 9810 SoC, with the US variant being powered by a Snapdragon 845 chipset. It is not yet known when the company will unveil the phone in India and what it will cost.

Reports suggest that Samsung may also unveil a new wearable alongside the Galaxy Note 9 on August 9. The device is tipped to be called the Galaxy Watch, and it is tipped to come with Android instead of TizenOS. Further, the device is also expected to come with the company’s Bixby digital assistant, with a “Hi, Bixby” phrase for activating the feature. FCC documents suggest that the Galaxy Watch may feature a 1.2-inch display and offer Wi-Fi and LTE capabilities.