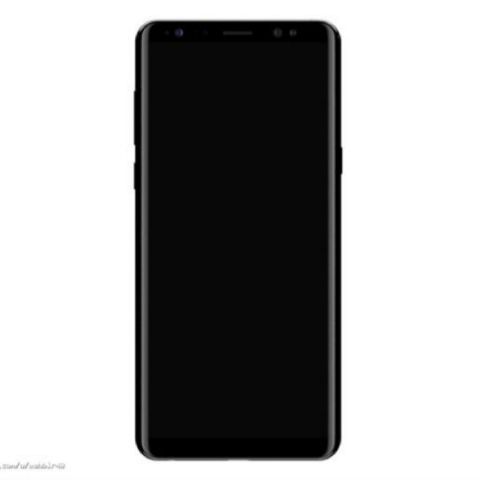 The Samsung Galaxy Note 8 though approximately one month away from its launch, is clearly not a well-kept secret. There have been numerous leaks and all the possible key details are more or less known.

A new leak reveals the alleged front design of the smartphone, giving us a clearer picture of the device. According to the image, leaked by Slashleaks, the Samsung Galaxy Note 8 comes with the same Infinity Display that was seen on the Samsung Galaxy S8/S8+. There are no side bezels and the top and bottom bezels are visibly small. The top bezel houses the speaker grille, front camera and the sensors.    The physical home button which had become synonymous to the Note family, is clearly not present. It is possible that the home button is integrated within the display just like the S8 family of devices.

There is one button on the right while there are two buttons on the left, as visible in the image which can be the power button and volume rockers respectively. The second button on the left is believed to be the infamous BIXBY button – which debuted on the Samsung Galaxy S8/S8+

The display appears to be large and is said to come with the 19.5:9 screen ratio. Rumors have pegged the Samsung Galaxy Note 8 display to be at 6.3-inch.

The other rumored specifications include a Snapdragon 835 platform and Exynos 8895 Octa processor based on the market, dual rear camera setup – with the dual lens and the flashlight positioned under the same glass. The fingerprint scanner is expected to be placed on the extreme right. Samsung is said to be using a 3,300mah battery, which atleast on paper doesn’t seem enough for this beast of a device. All these are speculated rumors and thus should be taken with a pinch of salt.

Obviously, there are a lot of expectations from the Note 8 as it replaces the infamous Samsung Galaxy Note 7. The Note 7 fiasco is well known to all. With batteries exploding on several devices, it became a nightmare for Samsung. The Note 7 is not over though, Samsung is now releasing refurbished Note 7s with the name Note - FE (Fan Edition). How does it fare? Will people buy it, after knowing what happened?  Only time will tell.