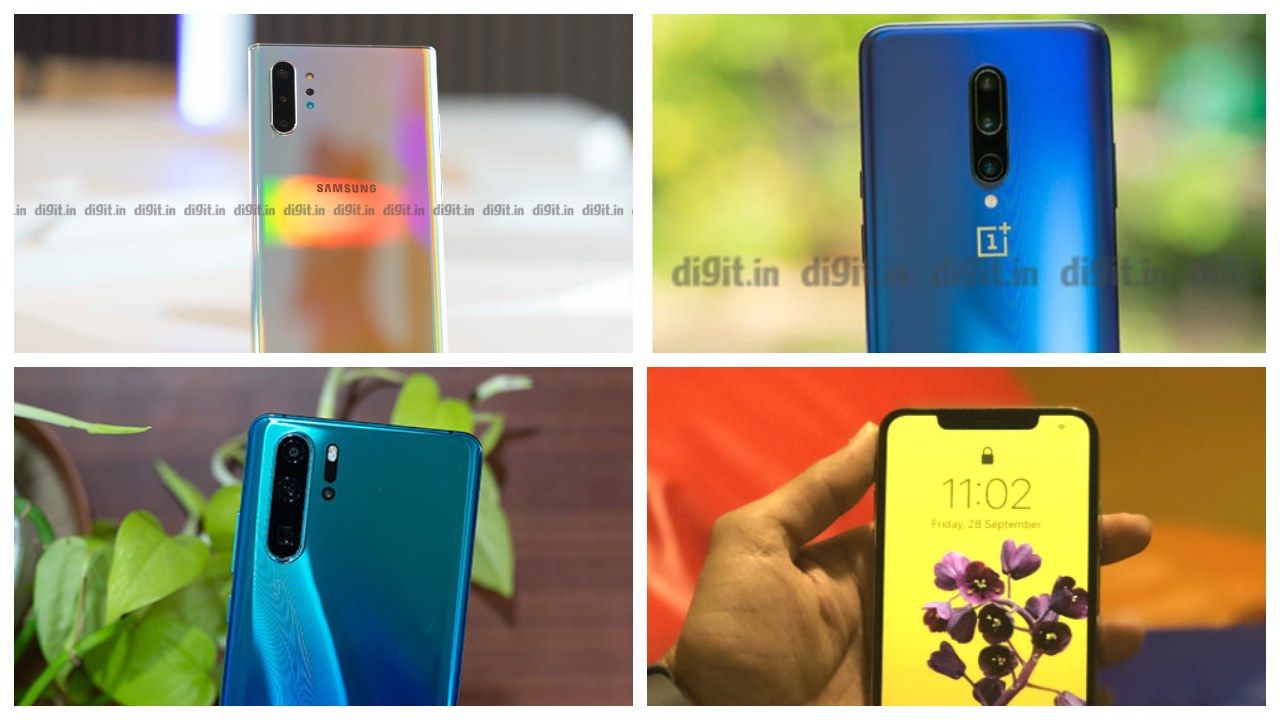 After launching its Galaxy Note10 series overseas, Samsung has now introduced the Galaxy Note10 and Note10+ in India as well. The new handsets run on the Exynos 9825 SoC, which is a new 7nm chip that was recently announced by the company. Now that we know everything there is to know about the Samsung Galaxy Note10 range of phones, in terms of specifications, let's take the handsets for a spec comparison.

We will be pitting the Samsung Galaxy Note10+ against the OnePlus 7 Pro, Huawei P30 Pro, and the Apple iPhone XS Max. All of these phones are competing against each other and feature relatively similar hardware. It should be noted that this spec comparison is based purely on ṭhe hardware specifications of the aforementioned phones and their actual real-world performance may vary. We will surely deliver a more definitive verdict when we receive the Samsung Galaxy Note10+ for review.

Samsung’s Note series of phones are known for their large displays and the Galaxy Note10+ is no different. The handset comes equipped with a 6.8-inch Dynamic AMOLED display that features a 3040 ×1440p resolution. It also comes with an Infinity-O display design, which means that there's a punch hole in the display to house the front camera. Other Samsung handsets like the Galaxy S10 series also feature a punch-hole display design. This punch hole is placed on the display's upper left portion so that a user's attention doesn’t drift towards it. However, with the Galaxy Note10 series, Samsung has decided to move the punch hole to the upper middle portion of the screen. It remains to be seen what kind of response this new design choice garners from its loyal users.

Moving on to other phones, the OnePlus 7 Pro (review) sports a 6.6-inch AMOLED display that features a 1440 x 3120p resolution. There is no notch or punch hole design on the device since it utilises a pop-up camera module to house the front camera. The Apple iPhone XS Max sports a 6.5-inch OLED display with a 1242 x 2688p resolution and comes with a square notch that houses the front camera and elements that enable Face ID. The Huawei P30 Pro comes with a 6.47 OLED display that has a 1080 x 2340p resolution and a dewdrop notch display design. Going purely by the rated specifications, the Samsung Galaxy Note 10+ and the OnePlus 7 Pro feature better panels and resolution over their competitors.

When we are talking about high-end premium smartphones, performance is something that makes or breaks a device. The Samsung Galaxy Note10+ runs on the new octa-core Exynos 9825 processor, which is built on a 7nm fabrication process and has a clock speed configuration of max 2.8 GHz + 2.4 GHz + 1.7 GHz. The OnePlus 7 Pro is powered by the octa-core Snapdragon 855 chipset, which can clock speeds of up to 2.8GHz. The Apple iPhone XS Max runs on the Apple A12 Bionic that has a configuration of 2 x 2.5 GHz Vortex + 4 x 1.6 GHz Tempest cores.

As for the Huawei P30 Pro, it runs on ṭhe HiSilicon Kirin 980 SoC, which is an octa-core SoC with configuration of 2 x 2.6 GHz Cortex-A76 + 2x1.92 GHz Cortex-A76 + 4x1.8 GHz Cortex-A55 cores. As the on-paper specs of the phones are different, it is difficult to say which phone outperforms the others. Additionally, we will be able to better test the devices once we put the new Exynos 9825 SoC through its paces.

Smartphone makers seem to be trying to push the limits when it comes to memory and storage. Most premium phones these days are packed with ample RAM and storage. The Samsung Galaxy Note10+ comes with 12GB RAM and up to 512GB of internal storage, while the OnePlus 7 Pro is equipped with up to 12GB RAM and up to 256GB of storage space. Apple iPhone XS Max also comes with up to 512GB storage but offers only 4GB RAM. The Huawei P30 Pro is equipped with 8GB RAM and 256GB of storage.

In terms of optics, phone manufacturers seem to be going the way of more is better. The Samsung Galaxy Note10+ comes equipped with four cameras on the back. It features an ultra-wide 16MP sensor that has an f/2.2 aperture, a 12MP wide-angle camera with a variable f/1.5-f/2.4 aperture lens with OIS support, a 12MP telephoto lens with f/2.1 aperture and lastly, a DepthVision VGA camera sensor. On the front, the handset sports a 10MP sensor with an f/2.2 aperture lens.

The Huawei P30 Pro (review) comes with a Leica Quad camera setup that includes a 40MP main sensor with an f/1.6 aperture lens, a 20MP ultra-wide-angle camera with f2.2 aperture, an 8MP telephoto camera with 5X Telephoto lens (f3.4 aperture) and a Time-of-Flight (TOF) camera, along with a 32MP front camera with AI HDR+. The OnePlus 7 Pro sports a triple rear camera setup that is said to cover the focal range of 17mm to 78mm. It consists of a 48MP Sony IMX 586 sensor, which is paired with an f/1.6 aperture lens with a custom-made 7-element plastic lens. This main sensor supports OIS and EIS, and is supplemented by an 8MP telephoto lens that offers 3X zoom and also a 16MP ultra-wide lens. There’s also a 16MP sensor on the front.

Apple decided to stick with dual cameras and its iPhone XS Max (review) comes equipped with a 12MP + 12MP dual rear camera setup. The sensors are paired with an f/1.8 and f/2.4 aperture lenses respectively and while one is a wide-angle lens, the other one is a telephoto camera. On the front is a 7MP camera with an f/2.2 aperture lens.

Since flagship phones are jam-packed with powerful hardware, one would expect the battery life to suffer. However, this is not necessarily the case since companies are working on integrating better battery cells in their devices and optimising the software to deliver better battery life. The Samsung Galaxy Note10+ is backed by a 4300mAh battery, while the OnePlus 7 Pro runs on a 4000mAh battery. Ṭhe Apple iPhone XS Max packs a 3174mAh battery, while the Huawei P30 Pro is equipped with a 4200mAh battery.

The article will be updated with the price of the Samsung Galaxy Note10+ post announcement.