The Galaxy M40 is the fourth device in the company’s newly introduced M-series which was tailor made to compete with the spec-heavy mid-rangers in the market.

The Galaxy M40 runs on Samsung’s OneUI based on Android 9 Pie.

Under the hood is a Snapdragon 675 paired with 6GB RAM and 128GB storage. 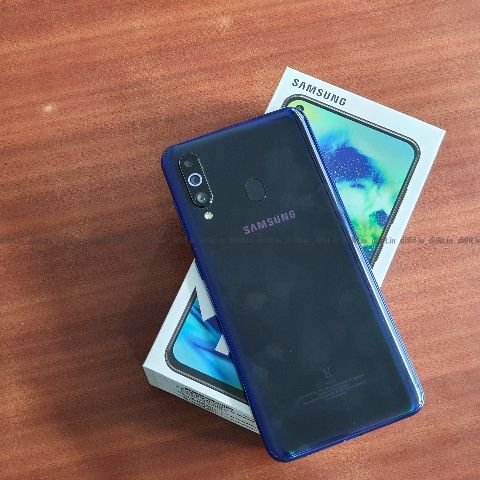 Samsung announced the Galaxy M40 for the Indian market today. The phone is the fourth device in the company’s newly introduced M-series which was tailor made to compete with the spec-heavy mid-rangers in the market. The Galaxy M40 takes the mantle from the Galaxy M30 and offers a new display design and high-res cameras. The phone comes with mid-range specifications that are comparable to popular devices like the Realme 3 Pro, Redmi Note 7 Pro and the likes.

The Galaxy M40 features the Infinity-O display with the front camera drilled into the top left corner of the display. However, unlike the Samsung Galaxy M30, this doesn’t have an AMOLED panel. Instead, the Galaxy M40 has the same TFT LCD display like the Galaxy M20. It has fullHD+ resolution and is Widevine L1 certified meaning you will be able to stream movies and shows on Netflix, Amazon Prime and the likes in FullHD. The display is protected using Corning Gorilla Glass 3.

The design of the phone bears strong resemblance to its predecessors. It’s made of polycarbonate, treated with subtle gradient colours. The M40 will be available in two colour variants, both in blue — Midnight Blue and the Ocean Blue. The phone have a rear-mounted fingerprint sensor and a triple-camera setup on the back.

Under the hood is a Snapdragon 675 paired with 6GB RAM and 128GB storage. There is only going to be one variant of the device. You can also expand the storage of the device using a dedicated microSD card slot up to 512GB. The phone also doesn’t have a speaker grill on the body. Instead, the sound comes out through the display using vibrations in the display. Keeping the lights on is a 3,500mAh battery which Samsung claims can give two days worth of battery life. It tops up using a 15W fast charger connected to a USB-C port.

The Galaxy M40 features three cameras on the back. There’s a 32MP primary camera with f/1.7 aperture along with an 8MP wide-angle camera with f/2.2 aperture and 123-degree field of view. Then there’s another 5MP camera for depth mapping. The triple camera setup is aided by Samsung’s scene optimiser which is nothing but the company’s marketspeak for AI scene recognition. The camera also shoot slo-mo and hyperlapse videos as 4K videos at 30FPS.

Unlike the other M-series phones, the Galaxy M40 runs on Samsung’s OneUI based on Android 9 Pie. There’s Dolby Atmos for enhanced audio as well as Widevine L1 for HD streaming.

The Samsung Galaxy M40 is going to be sold on Amazon India and Samsung’s online store. Samsung claims to have sold over 2 million units of the M-series in India within the first 100 days and the Galaxy M40 will go on sale starting 12 noon on June 18. There is only one variant of the smartphone in India with 6GB RAM and 128GB storage which is priced at Rs 19,990.