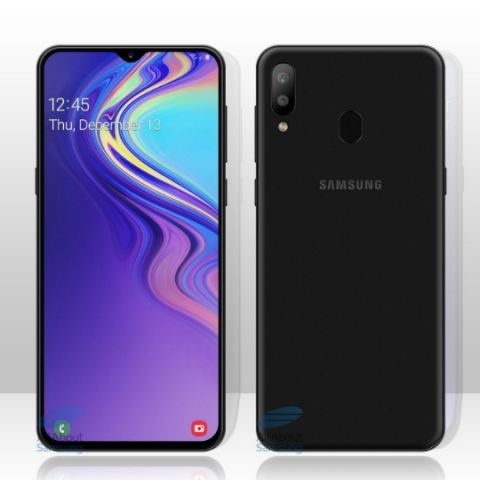 Samsung is reportedly working on its M series of smartphones, which are said to merge its Galaxy J, On and C series. Two phones under the upcoming series, the Galaxy M10 and M20, have already leaked and a previous report even revealed the M20’s possible design. Now, a new report tips at the device’s internal hardware, along with the regions where it could be launched. As per the report, via GSMArena, the Galaxy M20 could be backed by a massive 5000mAh battery, which is 1000mAh extra over the Galaxy Note 9. The phone could feature a 6.0-inch LCD IPS display. Further, the new report reiterates the presence of a waterdrop notch on the Galaxy M20’s display.

The Galaxy M20 is touted to run on Samsung’s Exynos 7885 SoC, coupled with 3GB RAM. In terms of optics, the smartphone could come equipped with a 13MP + 5MP sensor on the back and an 8MP sensor on the front. The device could be first made available in some regions in Europe like the UK, Poland, Germany, France, and Scandinavia but it’s not yet known whether it will launch in India. In addition, the upcoming device is speculated to be priced under the 200 Euro mark, which approximately converts to Rs 15,985.

An image of the Galaxy M20’s front panel was leaked recently hinting at some of its design elements. As per the image, the device’s display could feature a noticeable chin and as mentioned earlier, a waterdrop notch on the top. This waterdrop notch design was first introduced in India with the Oppo F9 and F9 Pro handsets, however, Samsung showcased the Infinity O, Infinity U, Infinity V, and New Infinity type displays at its Developer Conference this year but didn’t talk about a Waterdrop notch.

The M20 was also recently spotted on a Geekbench listing that suggested that the phone might be launched with 32GB of internal storage. It’s processor might be clocked at 1.6GHz and it could also come with an option for expanding the storage via a MicroSD card. The benchmark listing suggests that the phone might be running on Android 8.1 Oreo, however, it could be updated to Android Pie with the Samsung’s One UI before launch.