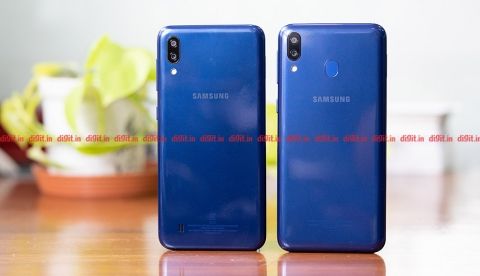 Samsung has launched its new Galaxy M10 and Galaxy M20 smartphones in India. The new handsets feature an Infinity-V display, which is basically the waterdrop notch. The two phones are aimed at millennials and are said to offer more battery, an “immersive experience” and they both feature similar main camera setup with an ultra wide-angle camera. The Samsung Galaxy M10 comes with L1 Widevine certification as well, which means that one will be able to stream HD content on the phone via online streaming services. The highlight of the Galaxy M20 is its large 5000mAh battery that the company claims can deliver up to two days of battery life.

The Samsung Galaxy M20 sports a 6.3-inch FHD+ LCD Infinity-V display, with a 19.9:5 aspect ratio. The phone is powered by the recently announced Exynos 7904 chipset. The phone comes in two variants with 3GB and 4GB RAM options, which can be paired with 32GB and 64GB of internal storage space respectively. The phone’s internal storage can be expanded up to 512GB via a microSD Card. It runs on the new Experience UI 9.5 that is based on Android 8.1 Oreo and is backed by a large 5000 mAh battery, which also supports fast charging. Samsung claims that the handset can last for up to two days on a single full charge.

Coming to optics, the Galaxy M20 comes equipped with a 13MP + 5MP dual rear camera setup where the primary sensor is paired with an f/1.9 aperture lens while the other sensor gets an ultra-wide lens with f/2.2 aperture. On the front is an 8MP camera with f/2.0 aperture.

Coming to the hardware, the Samsung Galaxy M10 features a 6.22-inch Infinity-V TFT HD+ screen with a 19.5:9 display aspect ratio. The smartphone is powered by the company’s Exynos 7870 SoC, which is coupled with 2GB or 3GB RAM and option to select between 16GB and 32GB of internal storage. In terms of optics, the Galaxy M10 features a dual rear camera setup with a 13MP primary sensor with f/1.9 aperture and a 5MP secondary ultra wide-angle sensor with f/2.2 aperture. On the front is a 5MP sensor and the phone supports only Face unlock as there’s no fingerprint sensor. The device runs on the new Experience 9.5 UI, which is based on Android 8.1 Oreo and is backed by a 3400mAh battery, but there’s no fast charging support.

The phones will be available in Ocean Blue and Charcoal Black colour models. They will go on sale via Amazon.in and the Samsung Online Shop at 12 PM on February 5.

Launch offers on the phone includes a Jio double data offer that will credit double data to users for 10 months when they recharge with Rs 509 and Rs 198 prepaid plans.

Samsung to ditch plastic for eco-friendly materials in electronics packaging