The Geekbench listing shows a smartphone with model number SM-M305F, said to be the Samsung Galaxy M30, powered by Exynos 7885 SoC coupled with 4GB of RAM.

Samsung is expected to introduce its rumoured Galaxy ‘M’ Series in January by launching three smartphones, a leak making rounds on the internet has claimed. According to a report in The Economic Times (via IANS), the India launch will mark the global debut of the Galaxy ‘M’ series. The smartphones under the series are said to come loaded with industry-first features. The leak comes around the same time when the rumoured Galaxy M30 has allegedly been spotted on Geekbench. 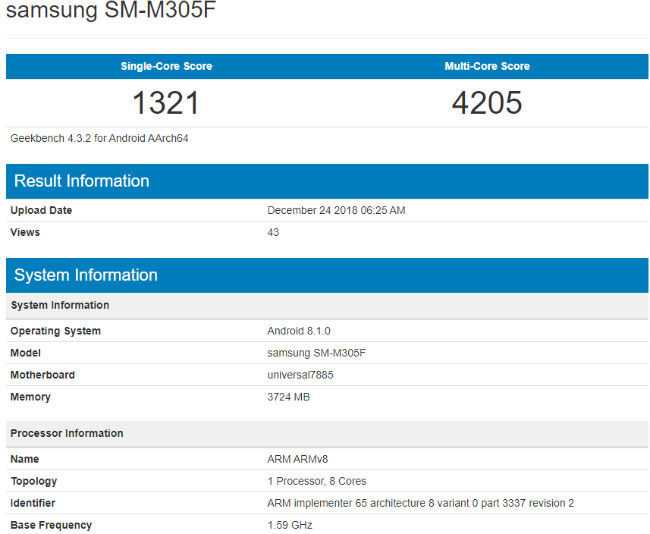 Earlier this month, a report claimed that Samsung will axe its J, On and C series of smartphones and reportedly consolidate these devices and release them under a new M series. It also hinted that a smartphone with model number M-M205F is under development and could be released under the new series under the name Galaxy M20. The SM-M205F could be launched in 32GB and 64GB storage variants, sport a waterdrop notch and a massive 5,000mAh battery, it claimed.

Apart from the Galaxy M30 and the Galaxy M20, the series is also expected to have the Galaxy M10. The Galaxy M10 has already been seen listed on Geekbench. The Galaxy M10 is expected to be powered by the Exynos 7870 chip clocked at 1.59GHz. It scored 724 in single core tests and 3637 in multi-core tests. Even the SM-M105F was seen running Android 8.1 Oreo and is said to feature 3GB RAM and 16GB and 32GB storage options.

Samsung could equip Galaxy A phones with LCD display